My sons and I were at our family’s prairie and farm this weekend.  At one point, we noticed that the cattle seemed agitated and were making a lot of noise and milling around.  We walked up to see what was going on, and when we got close enough, we could see that the cattle were focused on an animal of some kind that was slowly making its way through the grass. 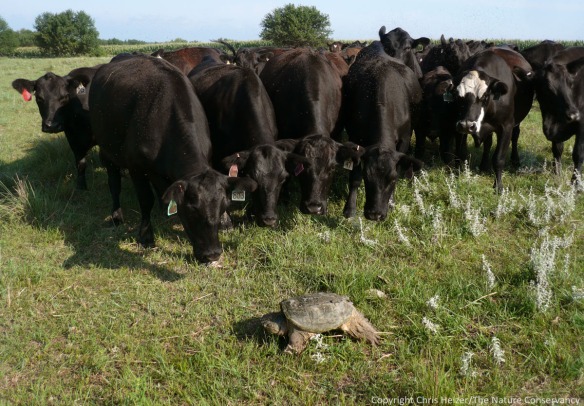 A snapping turtle and some very agitated cattle.

I’m not sure if they’d ever seen a snapping turtle before, but it was clear the cattle weren’t happy about having it in their pasture.  They took turns charging at it and making angry sounds that would have intimidated most creatures.  Whether because it was unworried or just figured the best way out of the mess was to keep going, the turtle just kept steadily moving through the short grass toward the distant pond.

After watching for a few minutes (from a safe distance – agitated cattle can be unpredictable), I took pity on both sides of the dispute and hauled the turtle off toward the pond.  I’m not sure what it’s going to find for food there – maybe some of the countless tiny leopard frogs we saw along the banks – because I don’t think there are any fish.  Maybe it’ll just enjoy a short respite from its bovine tormentors before setting out across the landscape again.

I wish him luck.  The cattle, on the other hand, probably have less charitable thoughts… 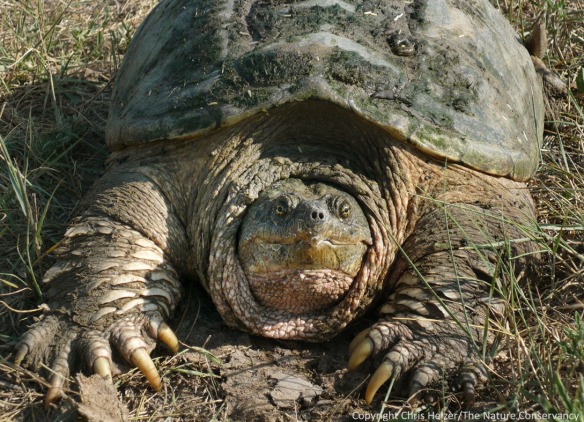 14 thoughts on “An Unexpected Traveler”