A guest post by Eliza Perry, one of our Hubbard Fellows.  All photos are by Eliza.

Giant black clouds of birds have been erupting from cottonwoods everywhere I go the past few days.

A huge overhead flock (called a murmuration when the birds are starlings). 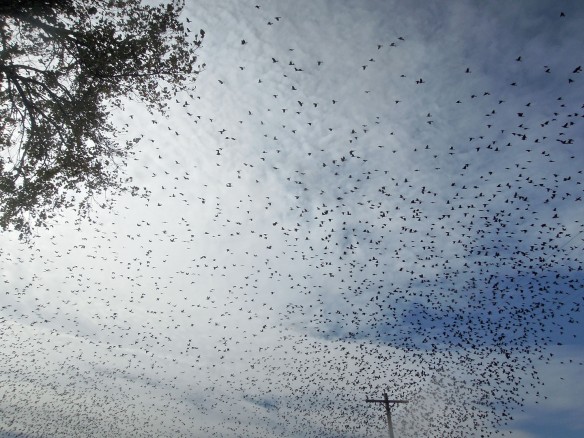 As Anne recently shared, the cows have been taken away from our prairies for the winter and, somewhat surprisingly, their absence has really been felt around here. They were quiet company, but extremely entertaining at times, creeping toward me while I picked seeds until I lurched suddenly just to watch them bolt in the other direction. Before long, they’d crept back even closer to me, and we went on like this for many hours.

I have a quick story to share that I captured driving around on the last afternoon the cows were here, though the story is as much about birds as our dear
cows. I  saw a large flock of birds along a fenceline and pulled over to the side of the road to get a better look at them. The cow-bird interaction I witnessed was, or seemed to be, quite playful. And funny.

As if on a mischievous (or vengeful?) whim, the neighboring cows rushed at them. 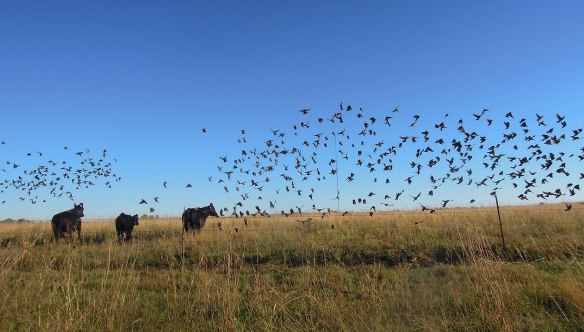 The birds lifted into the air in perfect unity, an effortless coordination that is said to resemble magnetism by statistical physicists studying similar behavior by European starlings.

Reluctant to give up their spot entirely, the cowbird flock settled down again close by. 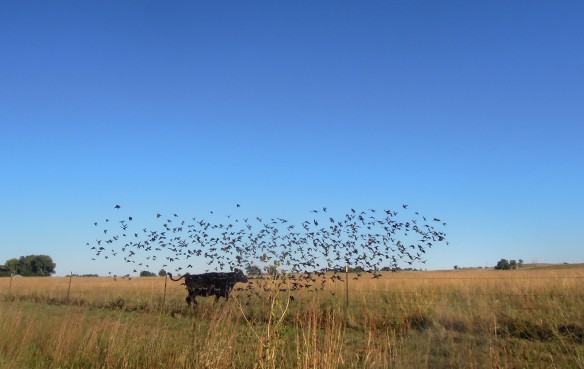 That is, until a lone calf honest-to-goodness peeled away from the group and charged the fence, seemingly aiming right for the birds. Maybe there was another reason for his behavior, but I like to think this calf was putting on a show.

That was apparently the last straw for the birds, and they flew away toward the river.

I know starlings are invasive, outcompeting other species like bluebirds and woodpeckers, and cowbirds have a nesting parasitism habit, but the huge flocks these creatures form are a wondrous sight. I was picking rosinweed one morning when things were going any way but mine (I thought I broke two backpack sprayers in a span of two hours), and a gigantic murmuration passed right over me for about ten minutes, with no end in sight. Just a long, chirping highway. This event, along with my renewed awareness of the quiet, scenic solitude where I work, lifted my spirits and ended my morning funk.

The prairie has a knack for doing that to me – and I imagine it does so for everyone else reading this – so I think I’ll be all right without my cow companions.

My sons and I were at our family’s prairie and farm this weekend.  At one point, we noticed that the cattle seemed agitated and were making a lot of noise and milling around.  We walked up to see what was going on, and when we got close enough, we could see that the cattle were focused on an animal of some kind that was slowly making its way through the grass.

A snapping turtle and some very agitated cattle.

I’m not sure if they’d ever seen a snapping turtle before, but it was clear the cattle weren’t happy about having it in their pasture.  They took turns charging at it and making angry sounds that would have intimidated most creatures.  Whether because it was unworried or just figured the best way out of the mess was to keep going, the turtle just kept steadily moving through the short grass toward the distant pond.

After watching for a few minutes (from a safe distance – agitated cattle can be unpredictable), I took pity on both sides of the dispute and hauled the turtle off toward the pond.  I’m not sure what it’s going to find for food there – maybe some of the countless tiny leopard frogs we saw along the banks – because I don’t think there are any fish.  Maybe it’ll just enjoy a short respite from its bovine tormentors before setting out across the landscape again.

I wish him luck.  The cattle, on the other hand, probably have less charitable thoughts…