Mike Arduser has (mostly) finished identifying the bees we found during our insect week in early July this year.  Though the data we collected during that week was just a first step, the early results are very positive.  It appears that our restored prairies are providing adequate habitat for most bee species, including some that have fairly specialized needs for nesting or feeding habitat.  Below is a summary of what we’ve found so far, what I think it means, and what our next steps are.

Mike Arduser (left) inspecting a captured bee in the Platte Prairies back in July, 2012.

As a reminder, our restoration objective is to reconnect and enlarge existing prairies by converting nearby crop fields to high-diversity prairie plant communities.  We hope the result is a larger, more connected, and more ecologically resilient prairie landscape.  The diverse plant communities in those restorations have successfully established, and we’ve been able to measure that by tracking plant species diversity and floristic quality.  It’s been more difficult to measure whether or not those restored prairies are actually stitching the surrounding landscape back together.  Our insect week this summer was an important step in evaluating that.

To understand the impact of our restoration work on bees, the first thing we needed to know was whether or not bees in remnant (unplowed) prairies are also using adjacent restored prairies.  While it seems a no-brainer that bees would feed from appropriate flowers, whether those flowers are growing in remnant or restored prairie, it’s still an untested assumption until we actually look.  Besides, the issue isn’t as simple as it might seem at first blush.

First, while many bees are generalist feeders that gather pollen and nectar from a wide range of available flowers, many others are much more specialized.  A restored prairie is helpful to a hungry bee only if it contains an adequate supply of the flower species that bee can feed from.  Using a diverse seed mixture for our restored prairies goes a long way toward ensuring that bees will find something to eat all season long, but for some bee species, the overall plant diversity is less important than the abundance of its favored (or necessary) food plant.

In the mid-summer of 2012, purple prairie clover seemed to be one of the most attractive flowers to bees. Several species we found during our insect week are pollen specialist on prairie clovers, but many generalist feeders were using them as well.

More importantly, bees are tied to their nests, and most solitary bees have a very limited travel radius from those nests (less than 1/4 mile for most species).  No matter how attractive the flowers in a restored prairie are to bees, those flowers have to be close to their nests to be useful.  If they can’t find appropriate nesting habitat in our restored prairies, bees in nearby remnant prairies probably won’t feed there very much either.

We had three main objectives for this first effort:

1. Get an initial inventory of the bee species in the Platte River Prairies.  We knew we wouldn’t capture everything, but we needed to get an idea of what species are in the area before we can do much else.

2. See if there are obvious differences between the bee species found in our restored and remnant prairies.  If some bee species are only found in remnants, that might indicate that our restored prairies are lacking either nesting or feeding habitat – or both – for those bees.

3. Design future evaluation strategies based on our initial data.  If there are bee species that appear only in remnant prairies, we need to figure out why.  More data collection might be needed to confirm or deny that they’re not in restorations, and if they truly are absent, we need to figure out the reason – and what might be done about it.

I still have a long way to go before I’m an expert at identifying bees. However, I am now able to say with great confidence that this is not a honey bee. (man, I hope I’m right on that…)

At this point, Mike has identified 49 bee species from our short week of collection this July.  Among those, there are still several species he’s not sure about, and he’s sent those to another expert for additional help. You can see a PDF of the entire list, along with more information by clicking on this link.  Of those 49 bee species, 26 were found in both remnant and restored prairies, 11 were found only in remnant prairies, and 12 were found only in restored prairies.  However, of the bees found in only one prairie category or the other (remnant or restored) most were only seen once, and finding one individual in one location doesn’t give us much of a pattern.

In fact, for about 40% of the species we found, we only collected one individual bee of each species.  While that’s enough to establish the presence of those species in the Platte River Prairies, it’s not enough to tell us much about their preferred habitats.  Among the rest, 28 species were found at more than one site (we looked at 4 remnant prairies and 10 restored prairies).  Of those 28 species, only two were found exclusively in remnant prairies – and in both cases they were in only two prairies and we found only 3 individuals of each species.  That’s certainly not enough to cause great concern at this point, but I do want to follow up on those two species – and the other 9 that were only found (once) in remnant prairies – to make sure that these early results are just due to low sample size, and not a real pattern of bees using only remnant prairies.  Again, all of this will make more sense if you look at the full table of data here.

In the meantime, I’m feeling pretty good.  If we had found numerous bee species in multiple remnant prairies but hadn’t seen those species in any restored prairies, that would raise big red flags.  Instead, the majority of what we found indicates that our restored prairies are providing good feeding habitat for at least most bee species.  For what it’s worth, Mike’s expert opinion is that most of the bee species we saw in restored prairie are nesting there as well.

In addition to identifying the species of bees we found, Mike also made notes about the nesting and feeding preferences of each, which helps me ask and answer some additional questions.  For example, 13 of the bee species we collected are pollen specialists (oligolectic), meaning that they are restricted to feeding from a single species or narrow group of species of plants.  A few of those (3 species) were among the bees only found in remnant prairies, but the majority were seen in restored prairies as well.  I think finding most of those “pickier” species in our restored prairies is a good sign. 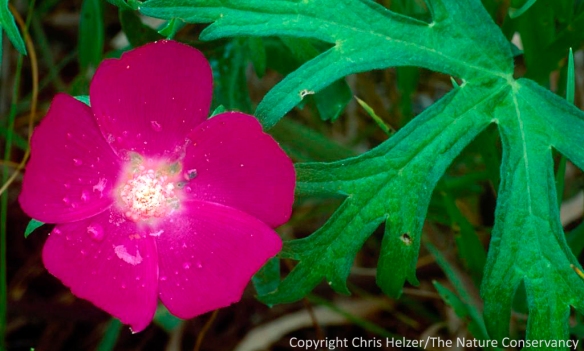 As I said earlier, it’s very hard to find nests of most bees, so it’s tricky to know for sure where these bees are nesting.  Mike was able to tell me what kind of habitat each bee uses, however, which provides at least a partial picture of what’s going on.  The vast majority of bees we found are ground nesters, and a handful of those are tied to sandy soils.  Of the remaining species, five nest in either twigs or cavities of some kind.  Mike was a little surprised to find so few twig nesting species in our sites.  That could indicate that we’re missing some important plant species that provide stems appropriate for bee nesting, or it could simply be that in this part of the world, most bees nest in the ground.

One final group of bees we found this summer are cleptoparasites, or nest parasites.  These bees don’t build nests of their own, but instead lay their eggs in the nests of other bees – where there is already provisioned food waiting for the larvae when they hatch.  We only found four species of cleptoparasites – and only one individual of each – but their presence (three were in restored prairies) is yet another positive indicator about the status of the bee communities in our prairies.  After all, nest parasites wouldn’t hang around if there weren’t nests to parasitize!

Summary and Next Steps

This was just a first step, but I think it was a big one.  We now have a good start on an inventory of bee species in our Platte River Prairies.  Of the bees we’ve found so far, most species are using our restored prairies (at least for feeding) and the rest may be as well – we’ll know more over time.  We need to continue building our inventory list, and searching our restored prairies for those bee species we’ve not yet found there.  Then, if we can find some help, I’d also love to try to figure out where our bees are nesting.  In the meantime, it’s really nice that we’re not seeing any big red flags indicating that our restored prairies are failing to meet our objective of enlarging and reconnecting prairie habitats – at least for bees.

Now we’ve got to start looking at other insect and animal species!  The list is endless…

I am extremely grateful to Prairie Biotics Inc. for the grant that helped fund our 2012 insect week.  Thank you also to Mike Arduser for all his work collecting, pinning, and identifying these bees – and for his willingness to continue helping us as we move forward.

7 thoughts on “Bees in a Restored Prairie Landscape – So far, So Good”