Last week, I posted a summary of some findings from a long project to enhance prairie habitat.  I focused that post on the lessons we learned from the fire/grazing management portion of the project, including impacts on regal fritillary butterflies.  This week, I’m looking at the other half of that project – overseeding and adding seedling plugs to our degraded prairies in order to increase plant diversity.  As with last week, you can find all the gritty details, including graphs, tables, and more, by looking at our full final report.

Maximilian sunflower is one of the species we’ve found easiest to establish in degraded prairies.  (These particular sunflowers are for illustration only – not from an overseeded site.)

During the five years of the project, we overseeded approximately 500 acres of prairie – focusing mostly on degraded remnant (unplowed) prairies that were missing many characteristic prairie wildflower species.  We harvested our own seed from nearby sites, and broadcast it on degraded prairies right after burning them.  The prairies were managed with patch-burn grazing, so cattle grazed those burned areas intensively for the remainder of the first growing season and then focused their grazing elsewhere in subsequent years.  To measure success of the seedings, I used replicated plots to count the number of new plants that established from seed.  Most of the seedings included multiple seeding rates, so I was able to look at the effect of seeding rate on establishment.

In addition to overseeding, we raised and transplanted more than 800 prairie and wetland seedlings into seven different sites, and added several hundred more seedlings to our nursery beds for seed production.  Most transplanting was done in the late spring, and plants were watered on the day of transplanting but afterward.  We marked (GPS and flags)and attempted to re-locate seedling plugs to evaluate survival, but that didn’t work out very well, and we didn’t find a lot of the plants we’d plugged in.  Some of those plants surely died (which prevented us from finding them), but for others, flags disappeared and GPS points weren’t accurate enough to lead us to the small plants we thought were probably there.  We did find some, but our estimates of success are pretty fuzzy.

We learned two major lessons from this portion of the project:

1.  Overseeding after a burn in a patch-burn grazed prairie can re-establish at least some missing plant species, but the use of a high seeding rate is important.

In tallgrass prairies further to the east of us, people have had pretty good, if inconsistent, luck with overseeding prairies without necessarily having to suppress the vigor of surrounding vegetation.  We’ve tried that here, and have seen very low success, maybe because our drier climate (25 inches of precipitation per year) increases competition for moisture?  Regardless, our best results have come from seeding after a burn – for good seed/soil contact – followed by grazing of the dominant grasses that appear to be the primary competition for new seedlings.  Patch-burn grazing works well, but we’ve also had good luck in the past by just grazing intensively for a month or so after seeding, and then pulling the cattle out. 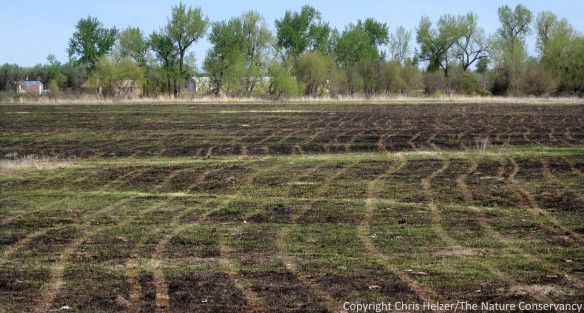 Trails from our ATV and broadcast seeder in recently burned prairie. Broadcasting after a burn helps get the seed/soil contact we need. Experiments with light harrowing as a way to get evern more soil contact haven’t shown any obvious results.  Note the absolute straight lines I made as I planted this site…

Seeding rate was very important.  We started by seeding at about the same rate as we use when we converting cropland to high-diversity prairie – about 1-2 lbs of bulk forb seed per acre.  As the project went on, we went as high as 8 lbs, and continued to see better results.  At least in our prairies, seeding smaller areas with more seed seems to be more effective than spreading limited seed over large areas.

Because others have incorporated light tillage or harrowing to suppress competition and increase seed/soil contact, we tried some of that as well, but our results were mixed.  Some tilled plots showed very high establishment, but others showed less than non-tilled plots.  We did find that when we tilled a few inches deep, we didn’t seem to kill any plant species – remembering that these are degraded sites already.  I would definitely not recommend that others try tillage on a large scale, but in small plots within degraded grasslands, it’d probably be worth some more experimenting.  We had a beautiful set of replicated tilled plots that I hoped would clarify the situation in 2012, but the severe drought overwhelmed that attempt.

Even at our highest seeding rates of 8 bulk pounds of forb seed per acre, the density of established plants was relatively low (in our best sites, we established around 150 new plants per acre) but hopefully high enough to create self-sustaining populations that will grow over time.  The plant species that established most readily included:

In terms of seedlings, we have found that most prairie plants are easily grown in greenhouse situations (with some exceptions) but that some take more than a year to germinate, and then perhaps a full year or more to grow large enough to transplant.  When we planted the seedlings into prairies, we clumped them together in groups of 5-10 plants to help form populations that could cross pollinate, and to make it easier to find at least one of the plants we’d put in. 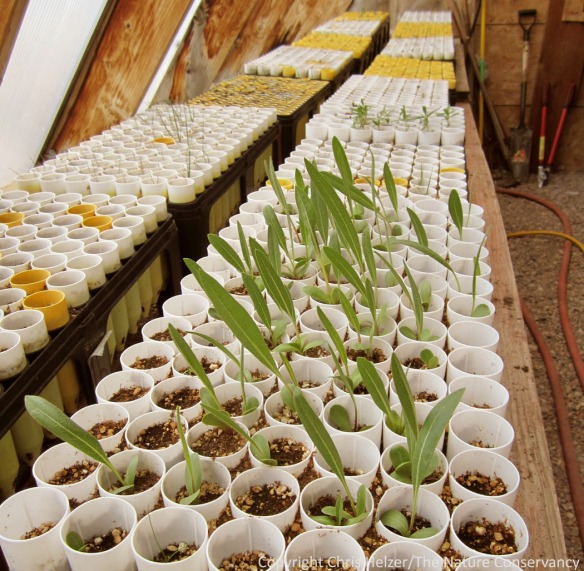 Compass plant seedlings and others in our greenhouse.

We had success with seeding plugs in some situations – particularly in terms of getting wetland sedge species established in restored wetlands – but transplant survival in degraded mesic prairies was mixed at best.  Most of our transplanting was done in the late spring, as we hoped to synchronize our planting with the wettest time of the year, but we may experiment with more fall planting in the future.  We felt that many of our seedlings may have died because they weren’t in the appropriate soil conditions, which we had to guess at since there were no existing populations of most of the species we were transplanting.  Broadcasting seed is probably a better way to match up appropriate plant species with their specific microhabitat requirements.

In our situation, it appears that overseeding is a cheaper and more efficient way to increase plant diversity in degraded prairies.  Of course, one big reason it makes sense for us is that we have existing capacity for large-scale seed harvest.  If enhancement of degraded prairies is a high priority for a landowner or land management entity, it might make sense to build their own seed harvest capacity.  That doesn’t necessarily mean large investments in equipment or people, though a pull-behind seed stripper or combine can be a nice way to harvest large amounts of seed quickly.  Large amounts of wildflower seed can also be harvested by hand (our typical method) if you are efficient and organized.  More information on seed harvest techniques and equipment needs can be found here.

18 thoughts on “Lessons From a Project to Improve Prairie Quality – Part 2: Overseeding and Seedling Plugs”