Fire, grazing, and drought are the three dominant forces that shape(d) our prairies over time.  Because of the drought we experienced last year, many of our prairies experienced all three of those forces in the same season.  We manage most of our sites with variations of patch-burn grazing.  After we burn a portion (patch) of prairie, cattle concentrate their time within that burned patch, grazing it much more intensively than other portions of the same prairie until a new patch is burned.  As a result, the dominant grasses are much weakened by the end of the season, temporarily opening space for opportunistic plants of many species. 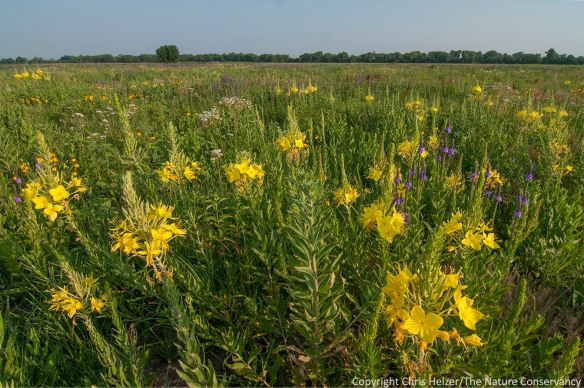 Showy evening primrose is prominent among a number of profusely blooming plants in this restored prairie that was burned and intensively grazed during last year’s drought. The Nature Conservancy’s Platte River Prairies, Nebraska.

The patch of prairie in the above photo is not being grazed this year, which will allow the dominant grasses – still present, but much reduced in size and vigor – to recover.  In the meantime, butterflies, bees, and other pollinators are enjoying an abundance of “weedy” flowers such as hoary vervain (Verbena stricta), showy evening primrose (Oenothera rhombipetala), yarrow (Achillea millefolium), upright prairie coneflower (Ratibida columnifera), black-eyed susan (Rudbeckia hirta), and many others.  At the same time those pollinators can still find their regular fare of more “conservative” long-lived perennial forbs (prairie clovers and other legumes, perennial sunflowers and silphiums, etc.) – they are just visually obscured by the species responding positively to last year’s grazing and drought.  If you’re interested, you can see some plant data from this site from a couple years ago that shows some trends in species frequency and floristic quality over time.

Here’s another photo of the same patch prairie, showing the diversity and abundance of opportunistic wildflower species and a thin, weakened (temporarily) stand of grass.

Another photo from the same prairie.

One of the aspects of fire/grazing management I enjoy most – and one that can make some people uncomfortable – is the variability in prairie response between years and between sites.  Every time we burn/graze a prairie, we see somewhat different responses from the plant community, even if we’re using very similar timing and stocking rates each time.  I think that’s great, and that it adds to the kind of messy, dynamic diversity I think is important in natural systems.  That messiness helps prevent any species or group of species from becoming too dominant, but also helps ensure that each species has the opportunity to thrive and reproduce now and then. 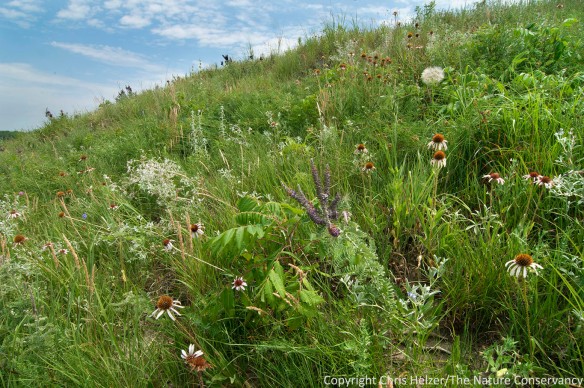 Griffith Prairie (owned and managed by Prairie Plains Resource Institute of Aurora, Nebraska). The area shown in this photo was burned and grazed during the drought of 2012 in a way very similar to the Platte River Prairie shown earlier. However, the plant community response at Griffith was very different – including a big flush of deer vetch (Lotus unifoliolatus) and abundant reproduction of leadplant (Amorpha canescens), among other things.  Visually, the prairie is very flowery this year because the vigor of the dominant grasses is suppressed from last year’s drought/grazing.

These days, I spend quite a bit of time thinking about the scale and arrangement of our management treatments across the landscape.  For example, I’m not sure how big each of our within-prairie habitat patches should be.  I don’t think it matters much to plants, but habitat patches have to be large enough for animals to live in, yet small enough that wildlife and insects don’t have to travel unreasonable distances to find appropriate habitat when conditions change from year to year.  For example, voles living in a thatchy patch of unburned prairie will have to relocate when that patch gets burned.  How far can they travel to find another patch of unburned prairie?  What kinds of habitat do they need as they make that trip?

For now, we’re just doing what seems reasonable, but I’ll feel better if we can get some data to help us better evaluate the travel abilities of insects, snakes, small mammals, and others.  Anybody looking for a career’s worth of research projects?

17 thoughts on “Prairie Response to Grazing and Drought”