I’m definitely a better close-up photographer than a landscape photographer.  Part of that is just the way my mind works – I tend to look down instead of up when I walk around a prairie.  I can always find an interesting flower or insect to photograph when the light is good for photography, but I have a harder time constructing an interesting composition or the larger landscape.  There are so many things to think about with landscape photos; foreground, background, sky, leading lines – or not… ack!  As a result, when the light is pretty, I usually look around for something small and interesting.

However, there are days and places where even I can take good landscape photos, and yesterday was a perfect example.  I got up early enough to drive the 35 minutes between my house and our Platte River Prairies before sunrise.  I’d been eyeing the prolific blooming of fourpoint evening primrose (Oenothera rhombipetala) in the sandhills on the edge of the river valley.  It’s been several years since we’ve seen a big explosion of primrose flowers, and this year’s seemed even more spectacular than the last one.

At the first glimpse of the sun, I knew it was a going to be good morning. The Nature Conservancy’s Platte River Prairies, Nebraska.

Before the sun popped over the horizon, I wandered around and pretended there was enough light to make good photographs, knowing that I was only shooting because digital photos are free…  Once the sun appeared, though, things got serious.

Fourpoint evening primroses all the way to the horizon.

How can you not take great photos when you’re surrounded by big yellow flowers, the sky is filled with gorgeous clouds, and the light is coming in low and warm?  I scurried around with my camera and tripod, trying composition after composition, and liking each one more than the one previous.  The biggest difficulty was trying to come up with photographs that really showed the size, scope, and abundance of the flowers in real life.  My wide angle lens felt insufficiently wide for the scene. 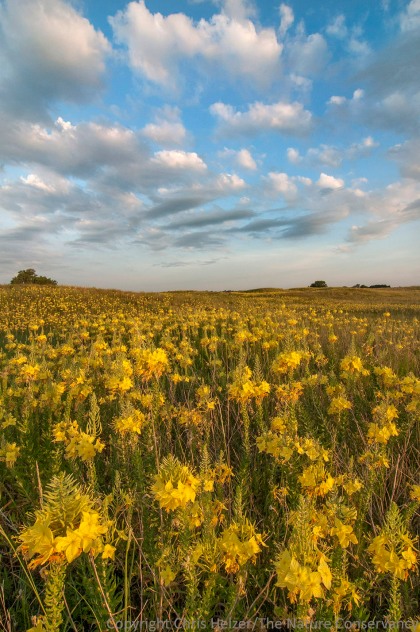 I ended up with hundreds of photographs of primroses.  I stayed up late last night trying to go through them and pick out a handful to use for today’s post.  I felt good when I narrowed them down to 20, but that’s way too many for one blog post – especially when they all look about the same…  I went to sleep dreaming about fields of yellow. 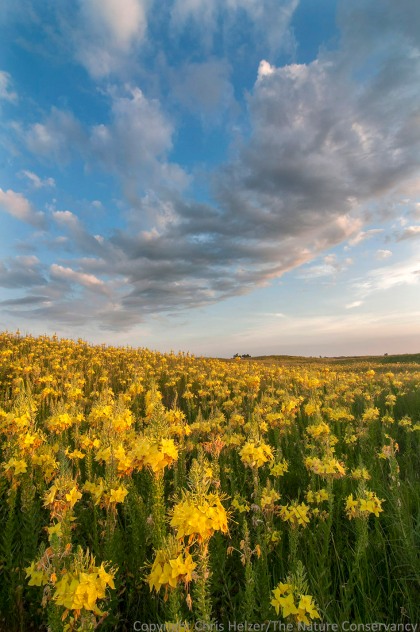 This morning, I managed to narrow it down to the photos you see here, but it was painful.  Stop by sometime and I’ll show you the others…!

The ecology behind the photos

So why are there so many fourpoint evening primroses this year?  Across the sandy prairies of Nebraska, fourpoint primrose is having a good year, though maybe not as good of a year as sunflowers had last year.  Fourpoint evening primroses are biennial plants, so they typically germinate and form a rosette (just leaves, no vertical stems) in their first year of life and then bloom and die in their second – leaving behind many thousands of seeds to kickstart the next generation.  They are not strong competitors with grasses, so fourpoint primroses can’t germinate in years when the vegetation is dense.

Ok, I did take a FEW close-ups too. Every day, the primrose opens a new row of buds as the previous days’ flowers wilt. Judging by the unopened buds at the tops of these flowers, we’ll be seeing yellow for a while yet.

The year 2012 was the most severe one-year drought on record for our area.  That weakened the grasses in our sandhills prairie.  Coincidentally, however, we also burned and grazed those hills in 2012.  As a result, by July, the hills were covered in very short brown grass and not much else because the plants had given up and gone dormant in the face of intense grazing and no soil moisture.  It looked pretty tough.  We had better moisture in 2013, and the grasses started their slow recovery, but there was a lot of open space between them that was colonized by annual plants (such as annual sunflowers).  However, another major colonizer was fourpoint evening primrose.  Unlike the sunflowers, however, the primrose plants didn’t bloom last year – they bided their time and soaked in the sun, water, and nutrients made available by the low density of plants surrounding them.  Then, this summer – 2 years after the drought – they made their move and exploded onto the scene with resplendent glory.  Or something.  Anyway, they sure are pretty.

We’ve had lots of rain this year, and we’re not grazing those sandhills this year, so the grass is getting pretty dense beneath the primrose flowers.  That means we won’t see many primroses next year or the year after.  That’s ok, they’ll wait – and when the time is right, they’ll be back.