When Kim Tri (pronounced “tree) contacted us about coming out to volunteer for a month in the late spring/early summer, we weren’t sure what to think.  Why would someone from Sterling College in Vermont – a tiny little liberal arts school we’d never heard of – want to come spend a month learning about prairies and doing land stewardship work?  She said she needed to do a senior project for school which would entail keeping a journal while she was here and then producing a mural (?!) as a final product.  Hmm…

However, as we looked into her a little more, we felt a little more comfortable.  She had grown up in Rochester, Minnesota and had spent a couple years doing Conservation Corps work around the country, so she at least had some familiarity with prairies and hard work.  Plus, we weren’t in a position to be too picky – we really needed the help.  …We got back to her and said we’d be happy to host her for a month.

When Kim arrived, we were in the midst of an herbicide spraying campaign against both musk thistles and poison hemlock.  She jumped right into the fray, joined the crew, and was a huge help.  Besides being a quick study and hard worker, we also learned that Kim was an artist of considerable skill.  She showed us some of her sketches and paintings one afternoon, and it was clear she knew what she was doing.   The mural idea started to make a little more sense, though I was really curious to see what she would come up with.  Before Kim left us, I asked her to send me a photo of the mural when she finished it, and said that maybe between some of her journal writing and the mural, we could make a blog post of some kind about her experience.  (I kept my expectations fairly low.)

Kim at the Niobrara Valley Preserve during a rare moment of leisure.

Last week, Kim sent me a photo of the mural (see below) along with a complete – and excellent -blog post, already written and ready to go.  She even had some very nice photos to illustrate the post.  I think you’ll appreciate her talents as you read her essay and enjoy her photographs and mural.  I’m going to get out of the way now and let you do that.

All the writing and artwork below are by Kim.

The announcement that I had plans in Nebraska was treated with a sort of pitying disbelief, expressed in one word.  “Why?” I brushed this off, steering more than one of these conversations around with an inspiration drawn from the cause for which I was prepared to travel a thousand miles and back.

Earlier this year, my answer to a similar question was much different.  I recall mentioning the idea of spending time in Nebraska or Kansas.  That time had to be spent somewhere with prairies and the folks who conserve them, according to the proposal I’d written for my senior project.  Why Nebraska or Kansas?  “Because I hate them so much,” I’d laugh.

Let me first say that I didn’t really mean that.  Every state has its charms.  The real reason, which I was reluctant to articulate, was to challenge myself.  It was crucial, personally, to prove that prairies were as dear to me as I felt they were when I was rambling around the Green Mountains.  Would I feel the same in the midst of a state for which I held no affection?

Really, I only personally disliked Kansas.  For me, Kansas was long, flat hours in the long, flat dark, a long, long way from anywhere called home.

Nebraska, in my only experience of the state, was a snowstorm following me from Arizona.  It was blurry stretches of highways that had to be travelled in order to make it back to Minnesota.  Also, I remember red noses stuck on the deer crossing signs, but that’s beside the point.

My attitude towards Nebraska came from a friend who had logged a lot of hours travelling through the state and was convinced that the country would be better off without it.  This friend visited me at the Platte River Prairies on his way across the interstate.  One spectacular sunset and an evening in the Sandhills later, he turned to me where we sat on the shag carpet of the legendary Derr House.  “So this is school for you?” he said.  “I guess you’ve got it figured out.”

Before arriving at the Platte River Prairies, the place for me was mostly a blank.  Having briefly looked over this blog while studying, I half-remembered having seen the preserve through the lens of another’s camera, but all I really had was a dot on a map.  Of all of the handy volunteer pages for the various Plains states on The Nature Conservancy website, theirs was the best put together.  It offered housing to scholarly volunteers who were interested in a month or so of work.  Decision made.

I blew into the preserve on the harsh wind of a Plains thunderstorm, which gave way to a long, rainy day in which to think about what I’d done.  I had no apprehensions about the house, but still I felt the niggling doubt that accompanies me on every move.  Where the heck was I?  Marooned in a vast island of corn, so different from the mountains of the past few years.  Also, it was rainy.

Still, I had to explore—meet the neighbors, so to speak.  I first became acquainted with the little prickly pear in the yard, a reassuring sign of being back west.  Then I met the yellow spring flowers, the ragwort and puccoon—sunny faces on a gray day, particularly when the sun shone on them through the breaks in the clouds.  The sudden sunlight also illuminated the grazing cows, making them appear touched with grace.  The cattle were also neighbors, which I came to accept despite my lifelong dislike of cattle.  They are essential parts of the natural community in a grassland ecosystem evolved to grazing. 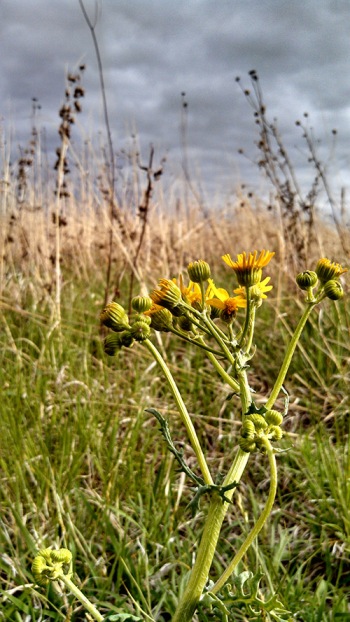 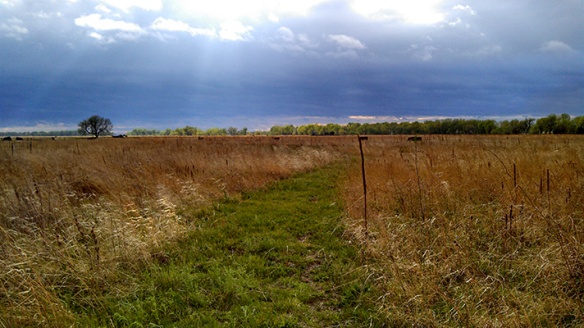 Cattle grazing along one of the hiking trails through the Platte River Prairies. Photo by Kim Tri.

My doubt didn’t last long.  This vibrant little community of the prairie bustled with inhabitants.  Kingbirds flicked their tails, deer bounded away, hawks soared, owls called, waterfowl preened.  Insects buzzed and greeted the new blossoms.  I, too, greeted the opening flowers, alert for something new every day to write in the journal which I was tasked to keep of my time in Nebraska.  Now, as much as I appreciate Aldo Leopold, phenology had always seemed tedious.  Then, suddenly, I understood.  I was elated at the sight of the first blooming prairie coneflower.  Ever since learning to recognize it, I’d been eyeing its developing buds and waiting.

What I remember most is a sense of peace in the tall grass.  Back in Vermont, there was no end of inspiring landscapes, but the trees and hills were becoming stifling, making me restless.  Out on the prairie, it was different.  Studying the grasslands was not like studying the forests, in a way that’s difficult to describe.  Perhaps it’s the clarity of being able to see so far.  Perhaps it’s watching the mood of the sky for warning weather, the wild power of the thunderstorms that make all calm days seem extraordinarily tranquil.

There was something also in my timing that seemed perfect, as well.  In my brief spell at the preserve, I got to experience the last burn of the season, straggling Sandhill cranes, the Niobrara preserve and their legendary bison tours, an unusually early Field Day, and a succession of wildflowers.

Perhaps it’s always the right time to be at the Platte River Prairies.  That would explain the chronic volunteers, who indulge their prairie work like a habit, and the revolving door of visiting researchers.  And everyone had something to teach, more than I could readily absorb.  Back in Vermont, a stack of books and an unreliable internet connection were my portal into the prairies.  Being in Nebraska, I was surrounded by dedicated and knowledgeable folks, and was frankly a little spoiled.  I’d gone from teaching my senior project advisor about drought and fire ecology to living it, being schooled by others and the land.

In a long line of good life decisions, I can add this one to the list, for sure.

Mural by Kim Tri, inspired by her time in The Nature Conservancy’s Platte River Prairies, Nebraska.  Please click on the image to see a larger, sharper version.  It’s worth it.

15 thoughts on “The Hidden Depths of Kim Tri”