I took a quick trip over to Lincoln Creek Prairie again this last weekend.  Two weeks ago, I photographed a praying mantis and saw several others.  This trip, I saw a couple more – including one that had captured, and was eating, a large sphinx moth.  I took a couple photographs of it and then moved on to look for other subjects.  A few minutes later, however, I found myself drawn back to the mantis, and just sat and watched him for a while.  Here are a few photographs from that morning.

When I first spotted it, the mantis was upside down on a pitcher sage (Salvia azurea) plant, and the moth was still struggling feebly.

As it fed, the mantis was getting fuzz all over its head.

As I watched, the mantis tried – mostly unsuccessfully – to wipe some of the hairs off its face. 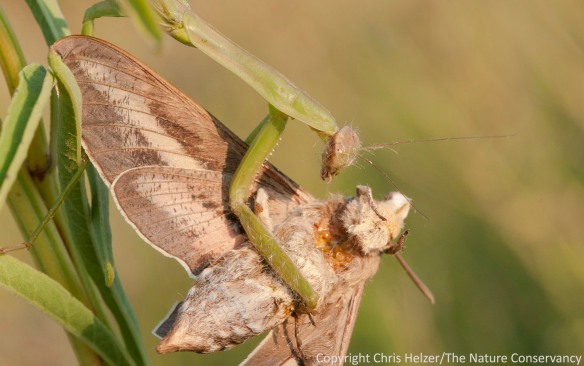 It’s always interesting to see which part of their prey a predator will start feeding on.  In this case, the mantis was eating the underside of the thorax first.

Every visit to a prairie is different – partially because the prairie is always changing, and partially because I focus on different aspects or species each time.  This week, I was near Griffith Prairie (owned and managed by my friends at Prairie Plains Resource Institute) when the light coming through the diffused clouds was too much to resist.  I popped over to see what was going on in the grassland…

A stink bug on coralberry (aka buckbrush or Symphoricarpus orbiculatus). Griffith Prairie – Nebraska.

On this particular day, wildflowers were blooming all over the place, but what kept catching my eye were stink bugs.  I don’t know if they were particularly abundant or if I was just paying attention enough to notice how many there were.  Either way, I seemed to see stink bugs on just about every plant species I looked at.  They weren’t all the same kind of stink bug, but I don’t know enough about them to tell for sure how many species I was seeing.

Here are three more photos from that same day.

… and a stink bug on leadplant (Amorpha canescens)…

… and one more, on grass this time.