Some of you are aware that there are several wildfires burning along the Niobrara River in north-central Nebraska.  As of this morning, the combination of fires had burned an estimated 58,000 acres, and several areas are still actively burning.  The Nature Conservancy’s Niobrara Valley Preserve is included within the area affected by these fires and much of the land within the Preserve has already burned.

I drove up early this morning to see if I could be of help.  By the time I got here, the fire on the Preserve had settled down quite a bit, and the main tasks now are to mop up remaining hot spots and watch for new flare ups.  Crews from the Conservancy’s Iowa, Nebraska, and Missouri chapters, along with local fire departments and others have been here since late last week.  Yesterday was the worst for the Conservancy, as crews worked extraordinarily hard (and successfully) to prevent the Preserve headquarters from burning while embers rained down from the burning woodlands to the south.

While things have settled down quite a bit around the Conservancy headquarters, the fires are still active and dangerous elsewhere.  As far as I’ve heard, no one has been seriously injured by the fires, but several homes have been lost and a couple towns have been evacuated.  Temperatures continue to be over 100 degrees Fahrenheit, with very low humidities and gusty winds.

On Conservancy land, all of the staff are safe, and we think all of the bison and cattle made it through the fire ok too.  I’ll post more later when we’ve had more time to assess the situation and think about next steps, but I wanted to get some photos and information out to people who have contacted me (and others) with questions and concerns.

In terms of The Nature Conservancy’s land – which is all I have much information on – the quick summary, as I understand it, is as follows.  Most of the Preserve north of the river has burned.  About half of the west bison pasture and the majority of the east bison pasture burned, along with a lot of the cattle pastures.  As I said earlier, the headquarters buildings are unscathed.  I don’t know much more than that at this point.

It’s too early to discuss the ecological implications of the fire very much – the immediate focus needs to be on the health and safety of the people in the area, their land, homes, and businesses.  That said, the ecosystems along the Niobrara River will recover.  It will look different in the coming years – especially in the woodland areas that burned – but there will be many species and ecological communities that will thrive in the aftermath of this event.  For now, however, let’s get this fire put out.

Here are some photos from today: 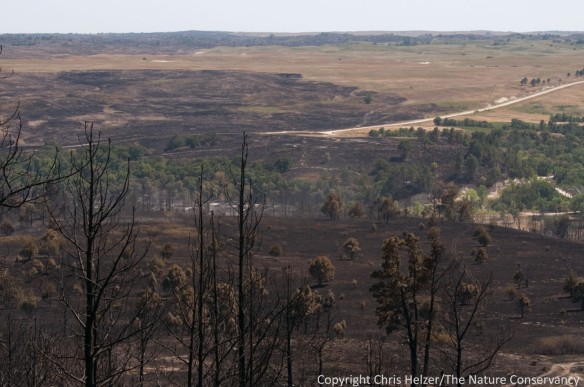 This is a photo looking south from the north side of the Niobrara River. The road in the photo is the Norden Road. The unburned area to the east (left) in the photo is part of the Conservancy’s bison pasture that was burned this spring with a prescribed fire, and was subsequently grazed enough that it didn’t burn this week.  You can click on this and other photos to see sharper versions of them.

The Preserve Headquarters buildings can be seen in the center of this photo – also taken from the north side of the river looking south. Everything around the headquarters has burned, at least to some degree.

The house where Preserve Manager Chris Rundstrom lives is surrounded by black, where crews conducted a “burn out” – a controlled burn of the vegetation around the house and other headquarters buildings. The burn out allowed the crews to burn the vegetation in a controlled fashion and protect the buildings before the wildfire reached the site. Even with the burn out, it sounds like yesterday was an exhausting day as crews spent the afternoon and evening chasing embers blowing in from the woodland to the south, and worked to extinguish nearby burning trees.

The Nature Conservancy of Nebraska’s state director, Mace Hack, surveys the scene on the north side of the river. Most of the pines appear to have been killed by the fire, but small pockets here and there will probably survive.

This photo looks west past the Norden Bridge, showing extensive burned areas north of the river. Much of the area directly across the river to the south of what’s shown in this photo is still unburned.  It’s too early to tell what damage the oak trees will suffer from the fire. The intense heat will likely kill a number of them, but we hope some will come through ok too. 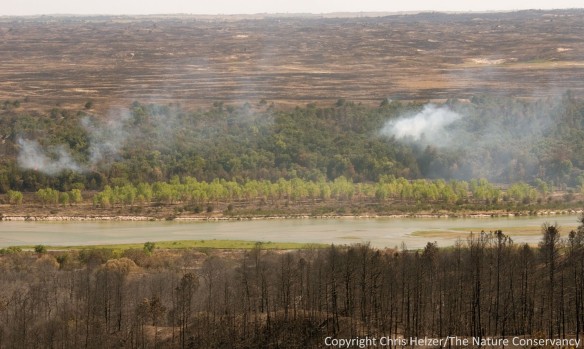 Two small areas of active fire can be seen along the south side of the river in this photo – just to the east of the Preserve Headquarters. These burning areas are within larger areas that have already burned, so they’re just being allowed to burn themselves out. The woodlands on the south side of the river burned extensively, but in many areas, the fire was low enough in intensity that many of the trees will probably survive.  As you can see, thousands of acres of sandhill prairie south of the river have burned. 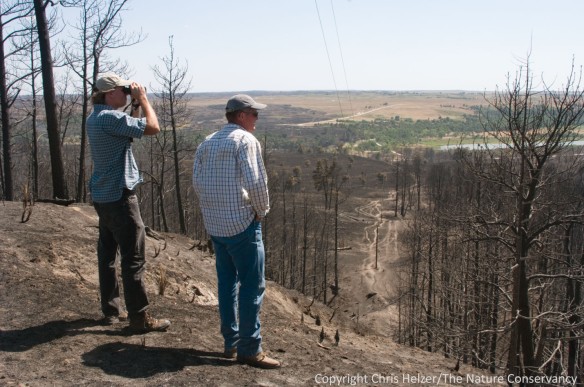 Conservancy staff members Mace Hack and Jim Luchsinger stand on a bluff along the north side of the river. The prairie communities in the valley will recover relatively quickly from the wildfire, but large areas of pine woodland will be dramatically changed during the long slow period needed for the trees to reestablish themselves. Those who are familiar with the 1989 wildfire at Fort Robinson State Park in western Nebraska, and what that looks like now, can probably use the recovery of that site as an example of what this area will look like down the road. There will be a diversity of plant and animal species that thrive where the pines burned, but the ecological community will be pretty different than it has been – for at least the next several decades.