A couple weeks ago, I was broadcasting seeds across a prairie we’d recently burned.  The sun had just popped out after several days of cool rainy weather, and its warmth felt pretty good.  As I crisscrossed the burned area, I noticed several large ant mounds.  When I looked closely at those mounds, I was surprised at the large number of ants massed on top. 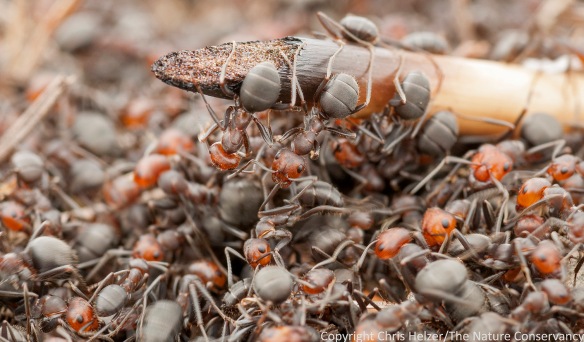 A few ants found a perch above the mob of ants beneath them on top of a large ant mound.  Formica obscuriventris.   TNC Platte River Prairies, Nebraska.

Because it didn’t appear most of the ants were doing anything other than milling about, I surmised they were probably just enjoying the heat of the sun as I was.  James Trager, who graciously identified the ants for me, supported my guess.  He added that this kind of thermoregulatory behavior is common, and not only warms the individual ants, but also the inside of the mound as those warmer ants go back into the tunnels. 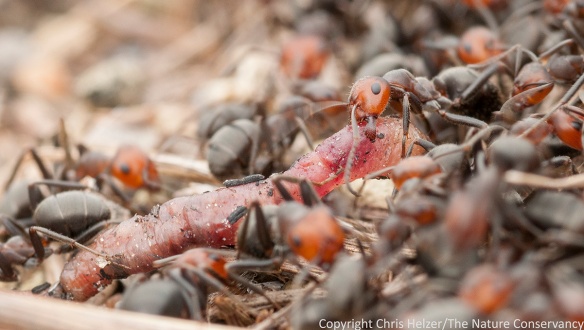 Mound building ants trying to drag a piece of earthworm into the mound.

Not all the ants were just enjoying the sunshine, however.  At least a few were returning from hunting trips with food for the colony.  The foragers were dragging the food items up the mound and toward multiple tunnel entrances.  Unfortunately, it looked like it was going to be very difficult to get the food past the mob of ants.  In particular, I watched as several ants pulling a piece of earthworm toward the tunnels gave up after trying for several minutes to drag it into the mob.  Other ants periodically tried to pick it up and move it as well, but they also gave up.  I assume the piece of worm made it inside at some point, but I can’t confirm that…

A spider being carried toward the mound. 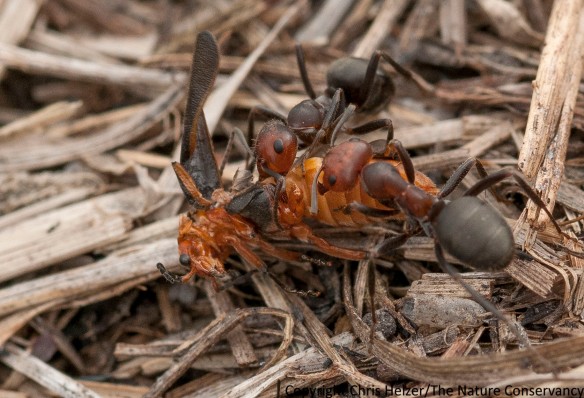 I enjoyed watching the ants, but eventually had to get back to work.  I was trying to help increase the plant diversity of the degraded prairie the ants are living in.  That broader range of plant species should help the ants in several ways, including by attracting a wider selection of insects for the ants to feed on.  I hope so.

Formica obscuriventris – aka ant species #23. It’s a mound-building ant of prairies and savannas.

If you’ve followed this blog for a while, you know that we’re trying to inventory the ant and bee species (and others) in our Platte River Prairies.  Our main purpose is to see whether or not our restored prairies are providing habitat for the insect species living in our remnant prairies.  If they are, it’s likely that we’re succeeding in our attempt to use restoration to enlarge and reconnect fragmented prairies.  Last fall, I posted the results of the brief survey James Trager helped us with in the summer of 2012.  At that point, we’d found 22 species.

During a prescribed fire last week, we found a big ant mound.  The ants were understandably agitated by the fire…  I noted the location of the mound and went back the next day with my camera (and my new flash kit!) to get some photos.  I emailed James the photos to see if he could identify the ant species, and of course he could – Formica obscuriventris.  More importantly, it wasn’t a species we’d found last summer, so I could add it to our list!

The ant mound had multiple entrance holes. There was a lot of activity around this particular one.

The mound was in a restored prairie, which was good to see.  Of the 23 species we’ve found so far now, 4 of them are tree-dwellers and 19 are prairie ants.  Of the 19 prairie ant species, we have found 14 in restored prairie.  I’m hoping we just haven’t looked hard enough to find the other 5 in restored prairie (very possible, given our limited sampling effort so far).  If that turns out to be true, it would be a great indication that our restored prairies are acting as new habitat for those ants, and enlarging/reconnecting formerly fragmented prairies.

Ants carrying the carcass of one of their compatriots.

I’m sure many of you could have identified this ant species without James’ help, but I couldn’t and am grateful to him.  He pointed out that it’s the boxy cross-section of the clypeus that separates this species from a couple other possibilities.  …But you probably already knew that…

Here’s the mound, with a 72mm lens cap for scale.

For those of you interested in the photography side of this, I photographed the ants with a 105mm Nikon macro lens on a Nikon D300s camera.  The images above are variously cropped to show the ants better.

It was a partly cloudy day, and the light kept switching from dark cloudy to bright sunny – neither of which was great for photography.  To mitigate that, I used a diffuser (thin white cloth on a big collapsable plastic circle about 2 ft in diameter) to reduce the light when the sun popped out and then used flash to fill in the rest of the light needed to use a fast shutter speed.  My flash kit is a Nikon R1 Close-up Speedlight system, which has two small flashes – mounted on either side of the lens.