Spring is the time for early wildflowers, cool rain showers, and northward-migrating birds.  It’s also the time during which smooth brome and other invasive cool-season grasses get their annual jump on the competition.

Suppressing invasive grasses and allowing native grasses and forbs to remain competitive in the plant community is one of the most important jobs for prairie managers in our area.  In some cases, well-timed herbicide treatments can be successful at knocking back those invasives, but it is usually very difficult to find a window of time when the temperature is warm enough for the herbicide to be effective but when most native plants are safely in dormancy.  More commonly, the best option is to suppress the growth of invasive grasses and decrease their competitive ability for that season. 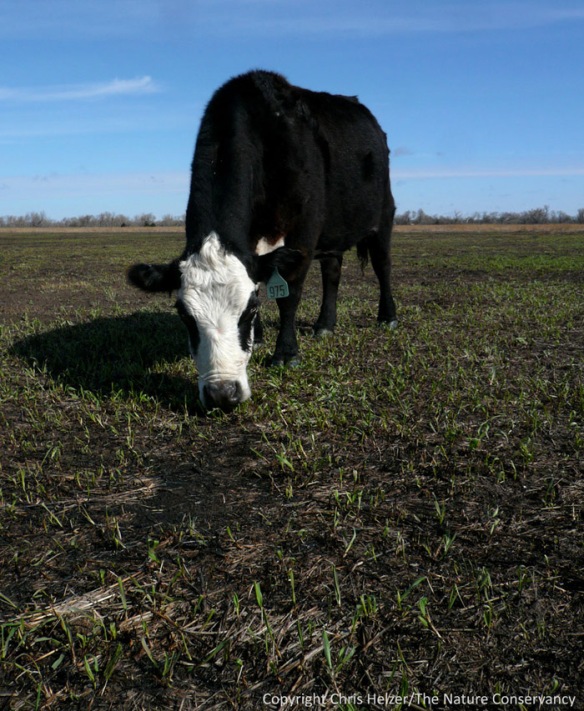 Cow grazing smooth brome in a recently-burned restored prairie. Repeated defoliation throughout the spring season will greatly weaken this brome, allowing other plants to encroach upon its "territory".

We’ve found that grazing is particularly effective at suppressing cool-season grasses, because the grasses are repeatedly defoliated during their growth period, greatly reducing their vigor.  The strategy works particularly well for smooth brome because, at this time of the year, brome is by far the favorite food of cattle in our prairies.  They’ll eat other invasive grasses too (I watched them working on Kentucky bluegrass this morning, in fact) but if smooth brome is available, they’ll hit that first.

In the case of the above photo, we’re using a variation on patch-burn grazing, in which only a portion of the prairie is burned so that cattle will concentrate their grazing is focused within that patch.  In this version of patch-burn grazing, cattle will be present all season, but we will reduce the stocking rate in late May.  The idea is to get high grazing pressure on smooth brome during the spring, but also to leave enough cattle in the pasture during the summer so they will selectively graze the warm-season native grasses.  With a light summer stocking rate, the cattle eat almost exclusively grasses, leaving wildflowers to grow with less competition from both invasive cool-season grasses and native warm-season grasses.  Outside the burned patch, very little grazing takes place at all, especially after the stocking rate is reduced.  Next year, a different patch will be burned so we don’t repeatedly stress the same plants each year.

This photo is a good demonstration of the attraction of both recently-burned patches and smooth brome to cattle – even when the brome is only about 2 inches tall!  This cow is working over a patch of brome in the restored prairie, even though it also has access to the unburned parts of the same pasture (seen in the far distant background of the photo), which includes some degraded native prairie with lots of smooth brome and other grasses in the 5-8″ height range.