I took our Hubbard Fellows up to the Niobrara Valley Preserve in north-central Nebraska last week.  While we were there, I spent quite a bit of time in the east bison pasture, where the recovery of prairie plants from last year’s summer wildfire was in full swing. 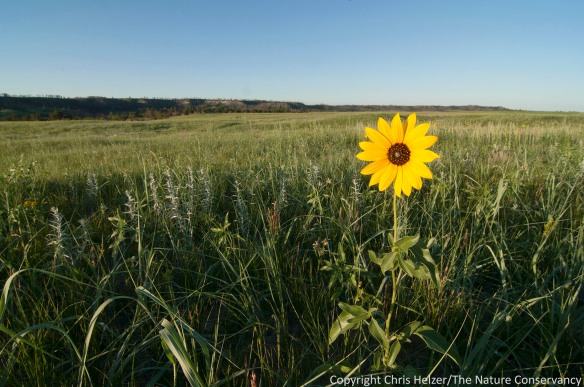 Prairie grasses such as sand bluestem (front left) and many others were growing well across the bison pasture during the first growing season since last July’s wildfire.

The lush green growth was in strong contrast to the burned prairie’s appearance back in late April when only a few sedges and yucca looked alive – and both were being cropped short by hungry bison.

These sedges were about the only green in the bison pasture on April 23 of this year.  Since the bison were mainly eating brown grass and hay all winter, anything green was pretty attractive.

We knew the prairie would survive the fire, but it was still good to see the quick strong growth after some nice rains this spring.  The Preserve staff reduced the size of the east bison herd last year because more than 90% of the bison pasture had burned.  The biggest concern was getting the bison through the winter with very little residual grass available to eat.  With the help of a little fall growth and some supplemental hay, the bison survived just fine.

The bison are enjoying having a wide selection of green plants to choose from after a long winter of sparse brown grass.

The drought and wildfire definitely weakened the vigor of perennial plants in the prairie, and there is a flush of annuals and other short-lived plants taking advantage of that this year.  Species such as goosefoot (an annual Chenopodium species), annual sunflower (Helianthus petiolaris) and six-weeks fescue (Vulpia octoflora) are abundant throughout the grassland.  At the same time, however, perennial plants such as prairie wild rose (Rosa arkansana), spiderwort (Tradescantia occidentalis), cutleaf ironplant (Haploppus spinulosus), and many more are having a great year too.

Flower species such as cutleaf ironplant (left) and spiderwort (right) are coloring the sandhills in the burned bison pasture.

Goosefoot (the tall skinny light blue plants) and other annuals are abundant, but so are perennials such as wild rose (pink) and hairy puccoon (yellow).

Besides the bison, we saw numerous other creatures throughout the prairie.  I wandered through the area where I’d seen sharp-tailed grouse displaying back in May, and flushed up a couple birds.  Upland sandpipers, western meadowlarks, and lark sparrows were all over the place.  Insects, of course, were easy to find too, including a number of species feeding on the pollen of the ubiquitous flowers.

Adult antlions were EVERYWHERE during my morning walk in the prairie.  A few were feeding on the pollen of spiderwort flowers.

This spring brought a big new batch of bison calves, a testament to the toughness of the females, who were able to get through a hard winter of sparse brown grass and a little hay.  There should be plenty to eat now – not only did the Preserve staff reduce the herd size to about 150 adults after the fire, they also increased the pasture size to about 10,000 acres.  While the prairie grasses are still weak, that light stocking rate should give those plants plenty of opportunity to recover, depending upon the consistency of rainfall during the remainder of the season, of course.  The staff will allow the herd size to grow again over the next few years, aiming for an eventual stocking rate of about 30 acres per animal. 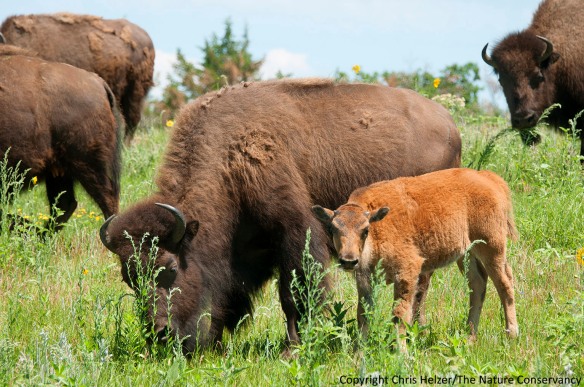 This year’s bison calves looked as cute and healthy as always. 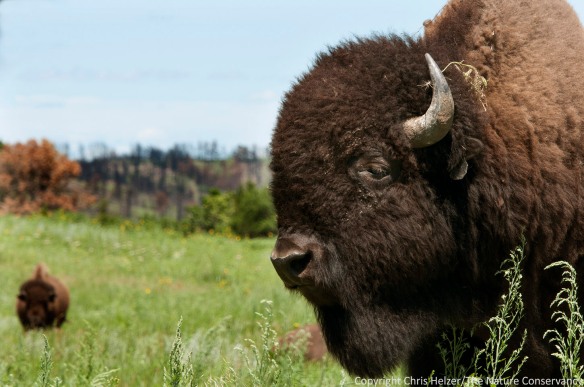 The big bulls looked healthy too…

In other news, the extent of erosion on the ridges where the pine woodland burned last year didn’t look any worse than the last time I was there.  In addition to a lot of deciduous trees re-sprouting from their bases, we saw a fair number of oak trees with at least some leaves on last year’s branches – though it’s not clear whether they’ll actually survive long-term or not.  Most importantly, we haven’t yet found any invasive plants moving into those burned woodland areas, which is good.

The burned woodlands will be significantly different – but fine – in the coming years.  The prairies, however, have been able to absorb the impacts of the drought and wildfire without breaking stride.