Back on August 29, I posted a photo of a praying mantis from here in Aurora, Nebraska.  Kathy from Omaha posted a comment that she’d seen more mantids this year than ever and wondered why.  I naively suggested that it wasn’t necessarily that it was a good year for mantids, but that it’s the time of year when they become adults and start flying – making them easier to see and more widespread.

I went back to the same prairie in early September and photographed a big mantid feeding on a sphinx moth (A Fuzzy Meal) and saw a few more mantids nearby.  Then, last weekend, I took another short walk in that prairie and saw about a dozen mantids within 15 minutes.  What is going on??  Are other people seeing this many around this year?

Because of their current abundance (and because they’re awfully photogenic), it seems appropriate to dedicate this post to the praying mantis.  Thus, here are some photos from last weekend.  After this, I promise I’ll take a break from mantids and post about something else for a while… 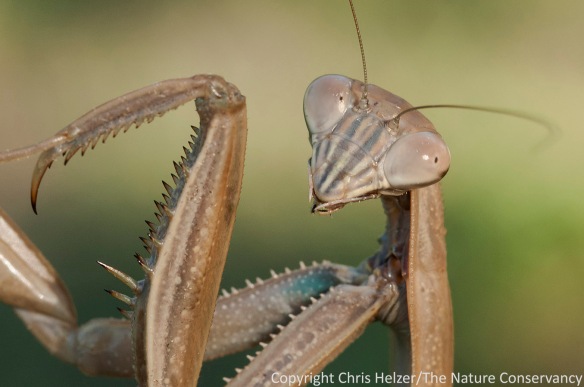 A closer look at the above mantid.

A mating pair. And no, the female doesn’t (usually) eat the male when they’re done.

They sure are compelling little creatures, aren’t they?

Interestingly, I found another praying mantis eating a sphinx moth on my walk last weekend.  I wouldn’t have guessed that sphinx moths were a favorite food of mantids – or one that’s particularly easy to catch.  On the other hand, I also noticed that most of the mantids I saw were sitting on or just beneath the flowers of pitcher sage (Salvia azurea) plants – just as the one in the last photo above is.  It’s likely more than a mere coincidence that most of the sphinx moths I’ve seen flying in that prairie were feeding on pitcher sage…  Wouldn’t you love to see that predation event in person?