I first noticed the dead ants about a year ago, when James Trager was visiting our Platte River Prairies to help us see our grassland through the eyes of ants.  As we poked around the prairie together we kept seeing ants that were stuck and dying on the flowers of two native thistle species (Flodman’s thistle – Cirsium flodmanii and Wavyleaf thistle – Cirsium undulatum).

This ant got stuck on the lower portion of this Flodman’s thistle flower and eventually died there. Helzer family prairie – south of Aurora, Nebraska.

The ants didn’t appear to be getting stuck on the numerous spines on the flowers.  Instead, they were getting caught by the flypaper-like stickiness of the lower portion of the flower as they tried to crawl up toward the nectar and pollen at the top.  While ants are definitely the most common victim of these flower traps, I’ve also seen bees, flies, and a few crab spiders get caught as well. 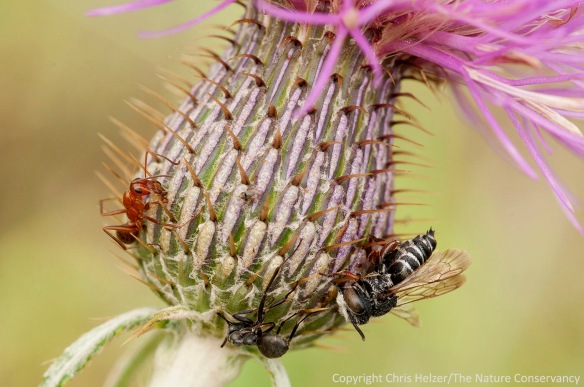 A small bee is among the victims on this particular flower. The red ant on the left was still alive when I photographed it. Flodman’s thistle at the Helzer family prairie.

It’s interesting to speculate whether or not ant trapping is a strategic adaptation the flowers have developed over time or just an unlucky accident for the ants.  Ants are not particularly effective pollinators, so it would make sense for thistles to evolve a strategy that helps prevent ants from “stealing” their pollen and nectar.  Since more effective pollinators such as bees and flies come to the flowers by air, stickiness of the lower portions of flowers wouldn’t affect them much (the above photo notwithstanding).  Ants have to get to the flowers by crawling, so a sticky zone between the ground and the pollen might be a very effective strategy for ant prevention.

The stickiness of thistle flowers is an interesting counterpoint to the extrafloral nectar produced by plant species such as sunflowers.  Sunflowers seem to produce that substance to ATTRACT ants – presumably to help ward off potential herbivores.  Thistles may be producing a substance to keep ants AWAY.  Very interesting.

Or it could just be a complete accident – which is not a very good story, and sort of sad.

(I vote for the defense barrier theory.)