Milkweeds have very distinctive flowers, with unique shapes and features.  I guess it shouldn’t be surprising that their pollination story is equally interesting.

First, milkweed flowers don’t produce thousands of of individual pollen grains that can each get carried away to other flowers by visiting insects.  Instead, milkweeds have what are called “pollinia”, or waxy masses of pollen that are designed to stick to insects.  You might think that a flower with a specialized pollen structure like that would have a system to make it easy, or even automatic, for any visiting pollinator to pick up and deliver that pollinia to the next flower.  After all, there are countless stories of flower types that facilitate pollination by forcing visiting insects to hit the right spots as they forage for nectar and pollen.

With milkweeds, not so much.

END_OF_DOCUMENT_TOKEN_TO_BE_REPLACED

For a prairie photographer who likes to shoot close-ups of flowers and insects, there’s no easier target in the fall than milkweed seeds.  The photos below were taken several weeks ago at one of my favorite local prairies.

Both species are common in eastern Nebraska, and largely underappreciated because of their abundance.  Like many other plant species, they’ve been unfairly labeled as weeds because they can live and thrive in a multitude of habitats, from cropfields to diverse prairies.  However, they aren’t a species that aggressively outcompetes other plants, and have so many positive attributes it’s hard to imagine not liking them.

They’re by far the most used milkweed species by the larvae of monarch butterflies, but are also the home of many other insect species that specialize on milkweeds.  In addition, the flowers of both species are large and attractive, both aesthetically and to the countless pollinator insects that visit them.  Finally, autumn in the prairie wouldn’t be the same without their big fluffy seeds blowing around. 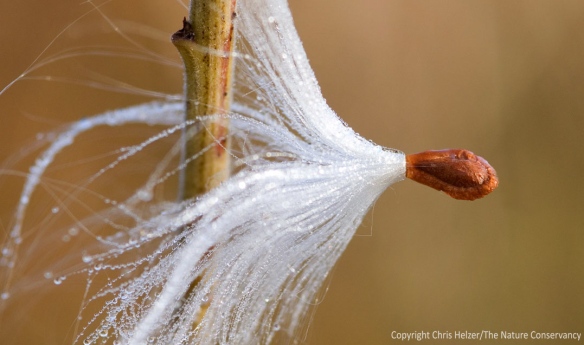