I pay close attention as I walk through prairies.  I watch for tracks to see what animals are around and I notice which flowers are blooming and which insects are feeding on them.  Often, I notice changes in prairie plant communities and try to attribute them to our management treatments, weather patterns, or other factors.  Observations such as these are an important part of how I learn more about prairies and adjust the way we manage and restore them.

Careful observation helps ecologists and land managers understand how natural systems work and how they are impacted by management actions.  However, observations are tricky because they provide an incomplete picture of what’s happening and are influenced by personal bias.

Unfortunately, observations are inherently biased.  When I start to notice a pattern through observation, I construct a theory to explain it.  That’s good science.  However, once I have a theory in mind, it influences the way I see things – and I tend to interpret my observations based on my theory.  That means it’s pretty easy to start telling myself a story that sounds good, but isn’t actually true.  Sometimes, I figure out that my story is wrong through repeated observations.  More often, however, what causes me to stop and reconsider is cold hard data.  Here’s a recent example of my data showing me that I need to reconsider a theory based on observations.

Canada wildrye (Elymus canadensis) is a native cool-season grass that establishes very quickly from seed in our prairie restoration (cropfield conversion) work.  It is often very abundant during the early years of a seeding before settling down into the plant community after a few years as other prairie plants become more dominant.  A common complaint from those working with Conservation Reserve Program (CRP) or similar prairie seeding projects is that wildrye tends to disappear a few years after planting, leading people to question the value of including the species in the seed mixture.  However, in our restored prairies, I’ve observed that while Canada wildrye declines in abundance after the initial establishment phase of a seeding, it seems to persist pretty well at a moderate abundance from then on.  I’ve attributed that to our grazing management, which is partially aimed at periodically decreasing the vigor of dominant grasses.  Weakening dominant grasses should help prevent less dominant species such as Canada wildrye from being pushed out of the community altogether. 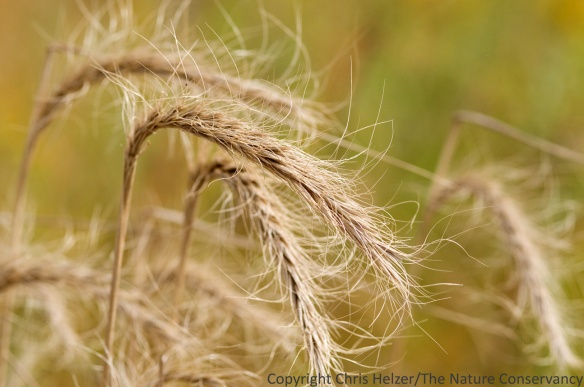 Canada wildrye is a native cool-season grass that is common in our restored prairies.

So, my theory (which I’ve shared with many people) has been that Canada wildrye is a grass species is tied to disturbance regimes.  If a prairie is managed with a mixture of intensive grazing periods and rest periods, wildrye can sustain a fairly steady population.  It was a good theory, and seemed to fit my observations.  Until last week, I was pretty happy with it.  Then I looked at some recent data. 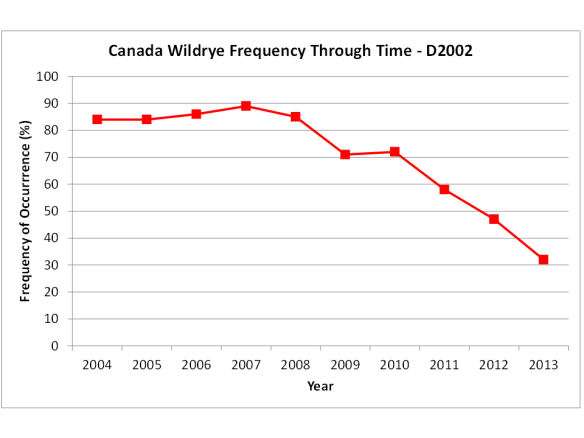 These data were collected from about a hundred 1 meter square plots across a prairie.  Each time I laid down the plot frame, I listed the plant species found within it.  By looking at the data from all of the plots, I can calculate a frequency of occurrence for a plant species (the % of all plots it was found in).   The data in this graph were collected from a restored prairie seeded in 2002. 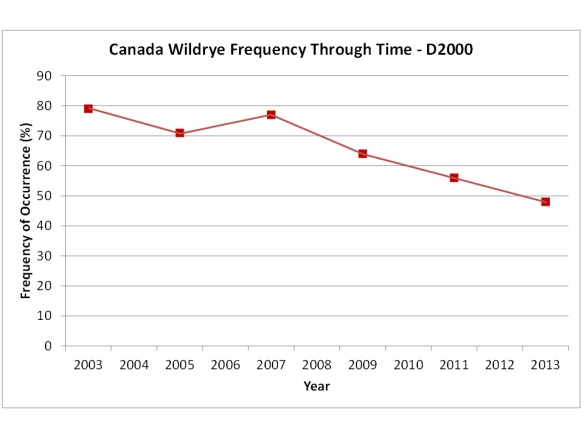 These data were collected from a restored prairie that was seeded in 2000. 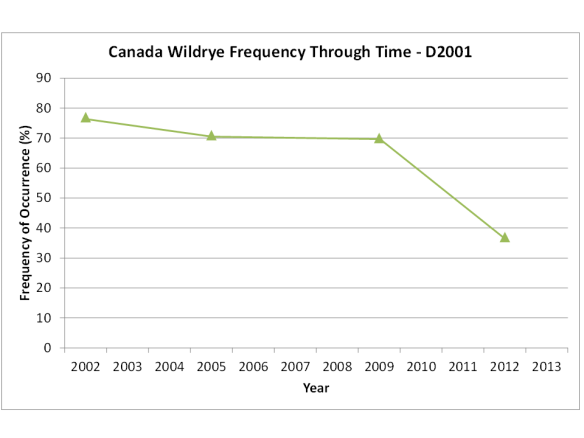 More data – this time from a restored prairie seeded in 2001.

From looking at the above three graphs, you might conclude that Canada wildrye populations stayed high for the first eight or nine years after planting a restored prairie and then started to taper off.  Another interpretation might be that our grazing was able to prop up those wildrye populations for a certain amount of time, but it is now starting to suffer the same fate my colleagues have complained about in CRP plantings.

Now, consider this next graph. 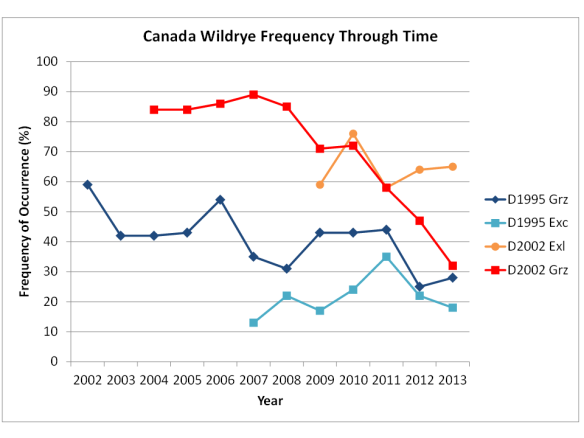 This graph shows data from the same 2002 planting as shown in the first graph (red lines in both graphs).  In this graph, however, the orange line is data from a large exclosure at the same site that has been burned but never grazed.  The two blue lines are from a different restored prairie seeded in 1995.  The dark blue has had fire and grazing management since 2002, while the light blue line is from a large exclosure at that site that has never had grazing within it.

By looking at the red and orange lines you might conclude that grazing management had a strong negative impact on Canada wildrye in the 2002 planting between 2011 and 2013.  The lines from the grazed portion of the site (red) and the exclosed portion (orange) are heading strongly in opposite directions.  However, the site was also grazed in 2008 and 2009, and there is less difference between grazed and exclosed in those years.  In addition, the blue lines on this graph show data from populations in a different nearby restored prairie (seeded in 1995) which don’t seem to be strongly affected by whether or not they are grazed.  There is less wildrye in the ungrazed exclosure of that 1995 planting but the changes in frequency seem pretty similar between the grazed and ungrazed areas.  Hmmm… 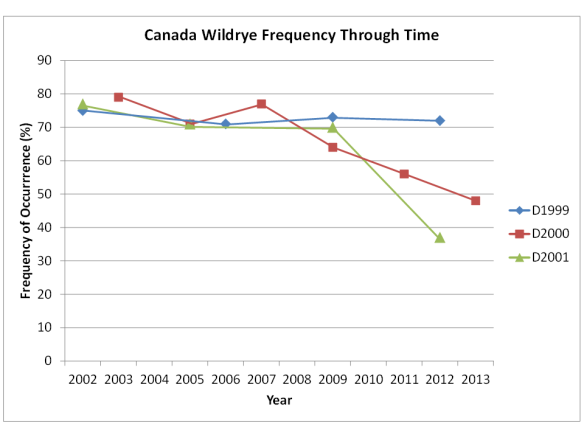 This graph shows data from two of the sites shown earlier (2000 and 2001 plantings) as well as another nearby restored prairie that was seeded in 1999.  Despite very similar management regimes, the 1999 restoration seems to be maintaining a high population of Canada wildrye.

This last graph just muddies the water even more.  While populations in the 2000 and 2001 restoration seem to be declining over time, wildrye frequency in the 1999 restoration has been holding steady for 15 years.  All of these sites are within a mile or two of each other, were planted with the same kinds of seed mixtures and have been managed with very similar mixtures of periodic fire, intensive grazing, and rest (modified patch-burn grazing).

It’s possible that soils play a role in the differences between sites, but all the prairies above are on similar alluvial (river deposited) soils.  None of them seem all that different from each other (I need some data on that!).  Weather could also be a factor, though most of the declines seemed to start around 2008 or 2009 – a few years after a long drought period – and have continued through both wet and dry years since.  I’m not sure what weather factors might have popped up since 2009 that would cause a decline in wildrye abundance (and only at some sites).

Surprise!  Reality is more complicated than a simple cause and effect relationship between a management regime and a plant species…

I take two major lessons from this.  First, I need to be more careful in my assumptions about how our management is impacting prairies.  That’s nothing new – I fall into that trap all the time, and frequently have to remind myself not to overgeneralize.  In this case, I had constructed a logical story explaining why Canada wildrye was abundant in our well-established (old) restored prairies but rare in ungrazed plantings such as CRP fields.  There are, of course, many possible explanations for that phenomenon (differences in soil types, plant diversity, seeding rates – particularly of warm-season grasses, fire management, etc.) but I grabbed one simple explanation without adequately considering all those other factors.

The second lesson is that it’s dangerous to rely solely on observations when trying to figure out natural systems.  This is not a new lesson either, and it’s why I try to collect as much data as I can.  Observations are really important, but are easily biased by what we think is – or should be – happening.  It’s natural to see what you expect to see.

Collecting some unbiased data, even just a little, is well worth the effort – especially if you target the data collection to your objectives.  It’s not useful to just collect data for the sake of data, but if you have a specific question (“are we maintaining diverse plant communities in our restored prairies?”) data can help answer it.  I consider plant community data collection to be a very important part of my job, but it doesn’t actually take that much time.  It takes about a day per year for each site I sample, including data collection, data entry, and analysis.  I strongly encourage every land manager to collect some kind of data from their sites.  It doesn’t have to be complicated or time consuming – just something that can help evaluate how management treatments are working.  Observations are great, but unbiased data is a good way to make sure you’re telling yourself (and others) the right story.

I’m not sure what to think about Canada wildrye now.  It’s a little disappointing to find out that my story was wrong – or at least incomplete.  On the other hand, the complexity of interactions that apparently drives Canada wildrye populations are why I love prairies and prairie management.  If it were simple, it’d be boring.

And no one likes a boring story.