Last week, I attended the Nebraska Natural Legacy Project’s annual conference, which was terrific.  At the end of the conference, I had the chance to go on a boat tour of the Missouri River south of Nebraska City.  The tour was led by Gerald Mestl (Nebraska Game and Parks Commission) who did a great job of explaining both the history and current status of the river.  We also got to see examples of side channel and bank restoration efforts and hear about ongoing research and monitoring efforts on fish and other Missouri River species. 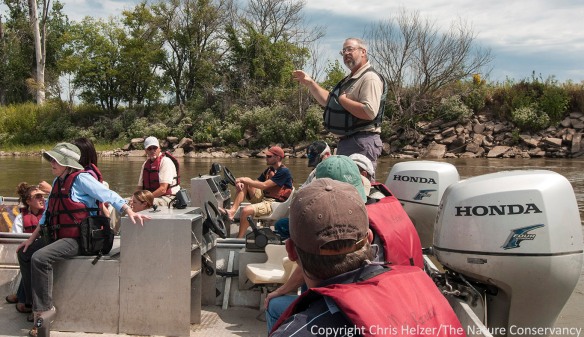 I’d love to give you a full recap of the information Gerald gave us on the tour, but I honestly don’t remember much of it.  Unfortunately for Gerald, but to the great entertainment of those of us on the tour, our attention much of the boat trip was diverted by numerous flying carp.  Yes, you read that correctly.

Asian carp, particularly silver carp, have invaded the stretch of the Missouri we were touring.  Silver carp are an invasive fish species that quickly become the dominant fish species in a lake or river (by biomass), though it’s not always clear what or how much negative impact they have on the ecosystem they invade.  Because silver carp are plankton feeders, they probably compete most with other species utilizing that same food source, including many larval fishes, paddlefish, and freshwater mussels.  Gerald said that so far they’ve not seen any obvious impacts from the Asian carp invasion of the Missouri, with the possible exception that paddlefish weights seem to be less than they used to be.  Of course, that doesn’t mean other impacts won’t arise as time goes by and more research is conducted.  Unfortunately, once Asian carp become established, there doesn’t seem to be a way to remove them from an ecosystem.

While there are concerns about what the impact of silver carp (and other Asian carp, including bighead and grass carp) will be on the Missouri River ecosystem, those of us on the boat tour last week were mostly concerned about ducking them as they came flying past or into our boats.  It turns out that silver carp have a propensity to jump (up to 10 feet!) out of the water in response to the vibrations caused by boat motors.  This wasn’t much of an issue in the main channel of the river, but as soon as we entered any side channel or backwater area where the water wasn’t strongly flowing, silver carp started flying out of the water like big slimy popcorn (or something).  Thus, my recollection of the tour and the information poor Gerald was trying to impart to us goes something like this:

“Historically, the banks of the Missouri River often consisted of steep banks that were being actively eroded by the flowing channel.  Some estimates are that those banks could shift an average of 180 feet a year!  That’s really important to understand because LOOK OUT!!”

“Ok, anyway…  Another important thing about the historic river is that it was full of snags (dead trees).  Navigation was really tricky because of all the big cottonwood skeletons along the bank and shallow islands.  Today, we don’t see much of that kind of habitat, which was probably really importWATCH YOUR HEAD!!”

“Yeah, so there are a number of fish species that aren’t doing well in the Missouri or lots of other similar rivers that have been severely altered.  Benthic (bottom-feeding) fish, in particular, are having a hard time, including species such asWHOA!! DID YOU SEE THAT??” 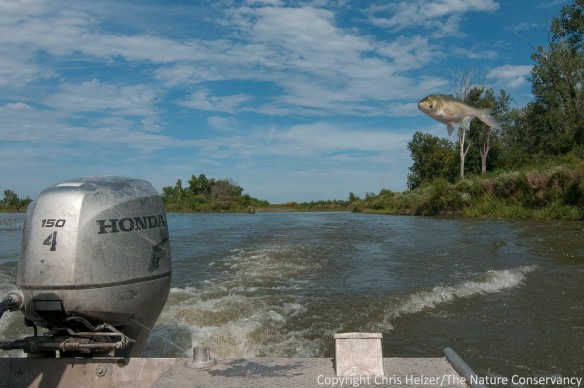 “We’ve been doing quite a bit of research on some of these rare fish and learning a lot.  For example, it appears possible that pallid sturgeon (a federally-listed species) might actually be periodically moving from the Missouri into the lower Platte River for certain reasons.  If that turns out to be true we might have to re-evaluaWOW! LOOK AT THE SIZE OF THAT ONE!!”

Nelson Winkel (The Nature Conservancy) holds one of the smaller silver carp that jumped into our boat while RaeAnn Powers looks on.

“Here at Hamburg Bend, there was a big restoration project that included the creation of a side channel that now forms a shortcut through a big bend of the river channel.  That side channel provides important habitat for a number of species, includOH MAN!  DID THAT ONE HIT YOU IN THE HEAD??” 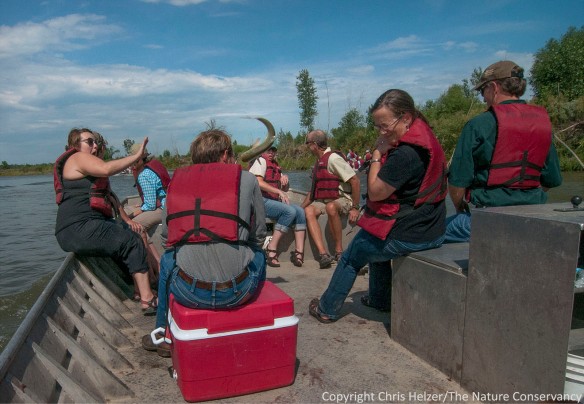 “Ok, where were we… oh yeah, so the current main channel of the Missouri River has been constrained to a 600 foot width.  That’s much less wide than the historic channel, and of course because it no longer is allowed to move around the floodplain, we don’t see the kind of bank erosion and associated habitat that used to be so important for thiWOOHOO!! DID YOU SEE HOW HIGH THAT ONE JUMPED??” 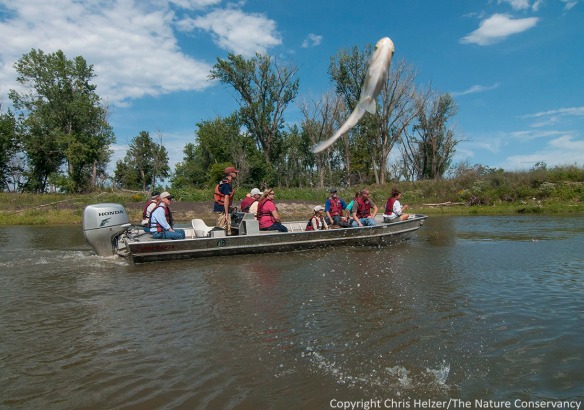 “On another subject, there has been some interesting recent research on turtles and their use of the Missouri River.  Among other things, they’re seeing some surprisingly long-range movement of turtles – including one that traveled 50 miles upstream!  That’s really interesting, and makes you think abouHEY! HEADS UP!!” 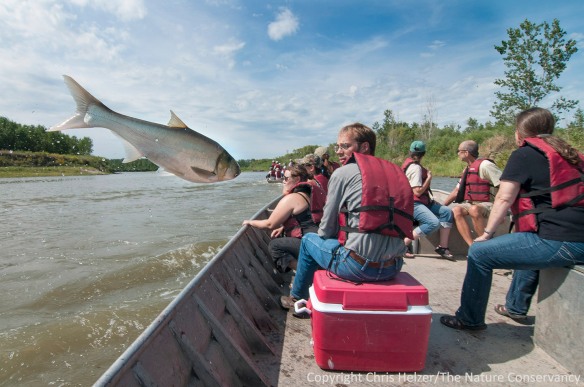 “You know, one of the main challenges of the Missouri River is the balance between recreational, flood control, and navigational needs (among others).  Trying to figure out how to restore and manage flows and habitats is complicated by LOOK – TWO MORE!!”

“Oh never mind… let’s just watch carp for a while.  At least that way we canI THINK THAT ONE JUMPED OVER THE WHOLE BOAT!!” 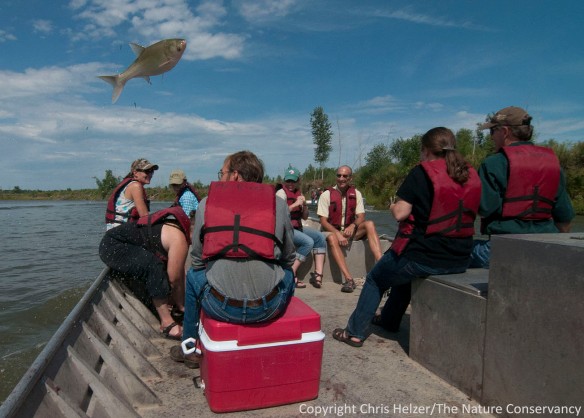 “So, that’s our tour for the day.  Thanks for coming out, and I hope you enjoyed it.  Sorry about all the fish slime on your shirt.  I hope that bruise on the side of your face heals ok…”