Seed harvest is a big part of our work here at the Platte River Prairies.  We don’t do as much complete restoration (converting cropland to high-diversity prairie) as we used to because we’ve just about run out of land to restore.  Instead we’ve shifted most of our seed work toward overseeding degraded remnant prairies that are missing many prominent wildflower species.  As a result, instead of harvesting from 230 plant species a year, we’re mainly focusing on getting as much seed as possible from about 30 to 40 species.

Most of our seed harvest is by hand, and when needed, we’ve been able to get adequate seed for up to 200 acres of cropland conversion work per year that way.  We’ve also used mechanical means to supplement our hand harvesting, including a couple different combines we’ve owned and pull-behind seed strippers we’ve borrowed from partners.  The mechanical harvesters have been helpful for getting big patches of seed from some grasses, sedges, and a few forbs.  However, the combines we’ve used aren’t very flexible about where they can go (hills and wet areas are tough) and the seed strippers’ brushes haven’t been aggressive enough to remove seed heads of some of the species we really wanted big quantities of – especially for our overseeding work.  However, a recent grant from the Nebraska Environmental Trust, via the Nebraska Game and Parks Commission, made it possible for us to purchase a new mechanical seed harvester.

After exploring a number of options, we decided to buy a seed stripper from Ned Groelz at Graywind Industries, Inc.  Our friends at Prairie Plains Resource Institute bought a pull-behind stripper built by Ned many years ago, and we liked a lot of its features – especially the ability to remotely control the harvester’s brush on the fly (turning it off and on and adjusting its height while driving through the prairie).  When we ordered our machine, we told Ned we were hoping to harvest large amounts of seed from plants with tough-to-remove seedheads and we weren’t sure a brush would be able to handle those.  He said he’d play with some ideas and see what he could do about that.

When Ned delivered the machine to us, he had a big grin on his face – a sure sign that he’d come up with something for our tough-to-harvest seed problem.  His solution was to replace the harvester’s brush with a more aggressive tool that included “stripping elements” – metal fingers, essentially –  made by the Shelbourne Reynolds company.  (Shelbourne Reynolds sells an attachment for combines that strips, rather than cuts, the grain from crops such as wheat and rice.)  Ned adapted their design for use in his pull-behind seed stripper and he was dying to know whether it would actually work.  Just to be safe, he designed the machine so that we could easily remove his experimental portion and replace it with a tried-and-true brush if we wanted to.

A close-up of the Shelbourne stripper elements included in Ned’s new harvester design.

Ned was so interested in testing his new design, he came out a couple weeks ago to watch it in action.  Without going into a lot of details, let me just say – it works great!  So far, we’ve tested it on wild bergamot (Monarda fistulosa), stiff sunflower (Helianthus pauciflorus), and Illinois bundleflower (Desmanthus illinoiensis), as well as a few others. 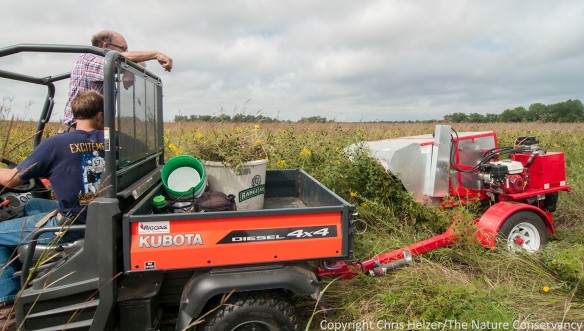 Nelson and Ned watch the new stripper as it harvests seed from Illinois bundleflower.  The machine is offset from the UTV so the UTV doesn’t smash the vegetation down before it is harvested.

The stripper removes some stems and leaves, as well as seed pods, but leaves most of each plant behind. 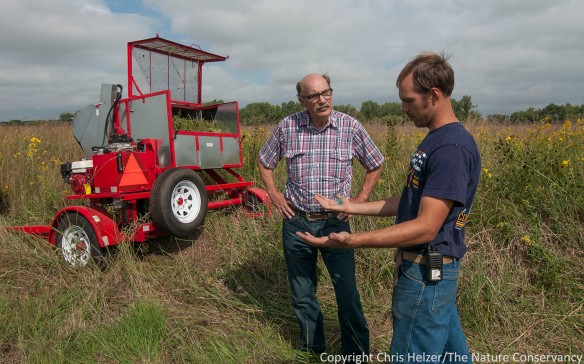 Ned and Nelson evaluate the performance of the new machine and talk about ideas for further improvements.

Hand-harvesting will still be an important component of our prairie restoration work. Many plant species are scattered here and there across a prairie and hand-harvesting is the only feasible way to obtain their seeds.  However, other plants occur in big patches, and this new machine is going to let us quickly harvest large quantities of seed from those, which will be a tremendous boon to our overseeding efforts.  We’ll need to do a little more seed processing (using hammermills and screens to separate seeds from the pods, stems, and leaves picked up by the stripper) than with hand-harvested seed, but that should go pretty quickly.

One of my favorite aspects of prairie restoration is the innovation displayed by people trying to come up with new effective ways to harvest seeds.  This new mechanical stripper is one more addition to a long list of those innovations.  Keep ’em coming, folks!

For more information and pricing of Ned’s mechanical seed harvesters, contact him at:

I want to be perfectly clear -this post was not sponsored by Graywind Enterprises, and we paid full price for the seed stripper and its components.   All the opinions about this equipment and how it worked are just my opinions.  My intent is to let others know of the existence of this machine in case it can help move prairie restoration and conservation work forward.