In our Platte River Prairies, regal fritillaries and other butterflies appear to depend heavily on a few weedy wildflower species as nectar plants.

I was in graduate school when I first started learning to identify butterflies.  I participated in several July 4th butterfly counts around Nebraska, and got to know some people who could help me with the tougher-to-identify species.  I was a good birder at the time, and quickly found many parallels between bird and butterfly identification.  One of those was that skippers were just like sparrows – lots of small drab-colored species that were really difficult to tell apart.  The difference, of course, was that I could catch skippers with my net to see them up close.

One species that wasn’t difficult to identify was the regal fritillary.  Once I figured out how to tell the difference between regals and monarchs I started seeing regals everywhere.  In fact, when I helped with July 4th counts, regal fritillaries were usually one of the most abundant species we saw.  I didn’t realize until later how rare regals are in eastern prairie states, and how fortunate I am to live in Nebraska where their populations are still strong.

Regal fritillary butterflies are still common in many western tallgrass prairies and mixed grass prairies, but have largely disappeared from most eastern prairies.

As I learned more about the species and its conservation status, I saw some inconsistencies between what regals were thought to need for survival in eastern prairies and what our Platte River Prairies were providing.  For example, many people I talked to from the east told me that regal fritillary larvae needed prairie violets for a food source.  However, our Platte River Prairies – which are full of regal fritillaries – only have the heart-shaped-leaf blue violet (Viola pratincola), and no prairie violets.  In addition, plant species like purple coneflowers (Echinacea spp) that are heavily used as nectar plants by regal fritillaries aren’t present in the floodplain of the Central Platte River.  In 2010, with the help of Dr. Ray Moranz of Iowa State University, we started a research project to learn more about how regal fritillaries survive and thrive in our prairies.

Through the project, we’re investigating multiple aspects of regal fritillary habitat use – including nectar plant use, the use of remnant vs. reconstructed prairies, and the way in which regals interact with a landscape managed with a combination of fire and grazing.  We’ve only completed one field season so far, and will need more time to answer those questions, but we have already seen some very striking results in terms of nectar plant use.

To collect our data, we regularly walked transects through our prairies and counted butterflies – noting nectaring behavior when we saw it, and recording the species of flowers the butterflies were nectaring on.  I’m only referring to the nectaring data in this post because we’ve got more work to do to analyze the other data we collected.  It’s also important to remember that these are just pilot-year data, although they match what I and others have observed for many years.

Though we saw many hundreds of regal fritillaries on our transects, relatively few were actually nectaring.  Early in the season when numbers were highest, we saw mainly males – patrolling for newly emerging females.  When those females finally arrived on the scene we started to see nectaring behavior from both males and females, but observations of nectaring were still relatively rare.  Multiple years of data collection will be important to confirm the patterns we saw this first year.

There were really only two kinds of wildflowers that attracted the vast majority of nectaring regal fritillaries through the 2010 season, and both are usually called weeds.  The first was hoary vervain (Verbena stricta) and the second was a small group of thistle species – primarily Flodman’s thistle (Cirsium flodmanii) and tall thistle (Cirsium altissimum).  Hoary vervain is a native wildflower that is largely considered to be a pasture weed by many people because it thrives in overgrazed situations.  Cattle don’t like to eat it and it can spread quickly when the surrounding grasses are weakened.  (However, it also decreases in abundance very quickly when the grasses regain their vigor.)  Flodman’s and tall thistle are two native thistles that are also considered to be weedy plants, and that do well in overgrazed pastures.  The third favorite plant was actually several species of milkweeds lumped together (primarily weedy species like Asclepias syriaca and A. speciosa).

During the early part of the summer, the majority of regal fritillaries nectaring on flowers chose hoary vervain. 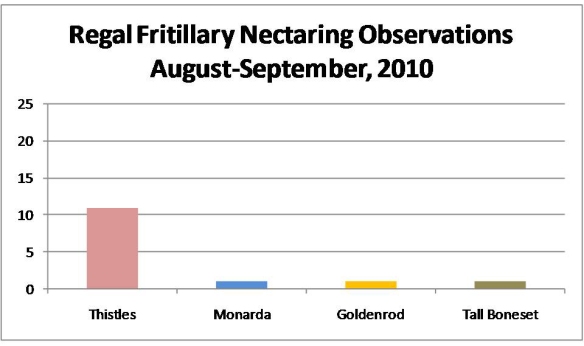 Most of our data collection centered on regal fritillaries, but we also collected data on other butterfly species.  So far, there doesn’t appear to be much difference in the nectaring preferences of regals and the larger butterfly community.  During the early part of the season, hoary vervain was the primary choice for most butterflies and a variety of other species got only infrequent visits.  Later in the season when hoary vervain was largely done blooming, thistles and a few other species, including wild bergamot – aka monarda or Monarda fistulosa and rosinweed (Silphium integrifolium), shared the load. 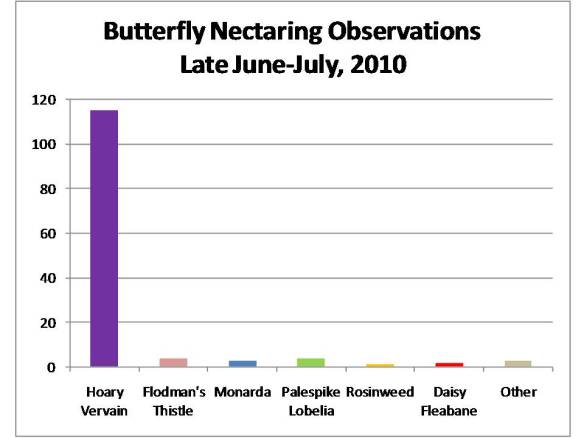 Observations of early summer nectaring across all butterfly species showed that hoary vervain was the dominant selection for nectaring.

Later in the season, other flower species split the nectaring observations fairly evenly.

One of the most interesting aspects of doing this research on butterflies has been that I’ve been able to look at our prairies through the eyes of butterflies – and that’s given me some surprising insights.  Our remnant prairies are largely degraded by years of overgrazing and broadcast herbicide use, and we’ve been working to slowly bring them back to higher floristic quality.  I’ve assumed that increasing floristic quality would also be good for many other species, including butterflies.  In addition, we’ve worked very hard at getting the highest plant diversity we can into our restored (reconstructed) prairies.  While we’re not restoring those prairies for butterflies, specifically, I’ve always assumed that butterflies would benefit from high plant diversity.  From our very preliminary data on butterflies, it appears that while our restored prairies have many more flower species, including many showy species, they may not be providing any better nectaring opportunities than our remnants!  The flower species most used by regal fritillaries and other butterflies are hoary vervain and thistles, which are at least as common in our remnants as in our restorations.

Regal fritillaries, and other butterflies, seem to rely heavily on hoary vervain for nectar in our Platte River Prairies.

I’m confident that there many other benefits of the plant diversity in our restorations, of course, including the availability of a variety of larval host plants for butterflies.  But it’s a little humbling – and intriguing – to see butterflies relying on plant species that do well in beat-up pastures rather than flocking to our showy restored prairies!  It’s important, of course, not to extrapolate these results to other parts of the country.  I’m not saying that regal fritillaries can survive in beat-up pastures in eastern states.  If that was so, we’d have many places in the east with lots of regal fritillaries.  Nebraska and other western states with high numbers of regal fritillaries also have landscapes with relatively high amounts of native prairie – and that may be the most important factor for regal fritillary survival.

The other lesson from our early data seems to be that the value of “weedy” species shouldn’t be discounted just because they thrive in conditions many flower species can’t take.  Vervain and thistles could be the primary plant species supporting our butterfly populations along the Platte River right now.  That’s a pretty good argument for being valuable.  In addition, the violet species that the regals must be using as a larval food plant along the Platte is considered to be relatively weedy because it does well in degraded pastures.  I’m sure glad we have a lot of it – and so are regal fritillaries!  Other weedy plant species have value as well – apart from their obvious role in filling space when “good” plants are weakened by fire, grazing, or drought.  The seeds of native ragweed and annual sunflower species, for example, seem to be excellent food sources for many small mammals and birds (judging from the density of tracks around the plants when it snows).

I’m really looking forward to next season’s butterfly transects.  I enjoyed reacquainting myself with butterflies last summer, and it was good for me to look at our prairie work through a different lens.  I’m sure we’ll learn more as we collect and analyze more data.  In the meantime, we (and our butterflies) will continue to enjoy and appreciate our weeds.

A big thank you to Dr. Ray Moranz for his assistance setting up this project.  Also, Mardell Jasnowski directed most of the data collection in 2010, with help from Nanette Whitten, Nelson Winkel, and Natalie Goergen.

16 thoughts on “The Importance of Weedy Flowers for Butterflies”