I took my two sons up to the Niobrara Valley Preserve earlier this week for one last outing before school started.  It was fun to see the Preserve through their eyes.  While I was looking at impacts from last year’s fire and grazing and noting ecological interactions between sunflowers and insects, the boys were chasing toads and just having fun bouncing along through the sandhills.

The big selling point to get the kids to tag along was the promise of seeing bison.  After driving around the 10,000 acre pasture for more than two hours without a bison sighting, I was getting a little nervous about keeping that promise.  Just as I was about to give up, the radio crackled and Richard (our bison manager) called to say he’d spotted bison at the opposite end of the pasture while he was working on something else.  About half an hour later, we found them and the trip was officially a success.

Here are a few photos from the two days:

My son John, standing at the welcome sign for the Preserve.  Did I mention there were some sunflowers blooming in the sandhills this year?

John spotted this turtle along the road into the Preserve, so we stopped to have a closer look.

Here’s Daniel, standing among the weedy regrowth under the burned out pines north of the river. 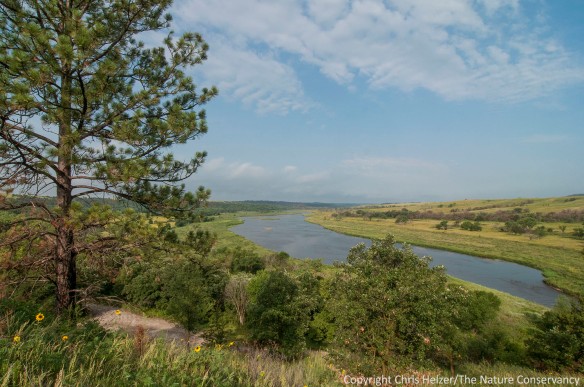 The Niobrara river from a high vantage point.

It was a relief when we finally popped over a hill and saw bison spread out below us.

The bison seemed sleek and healthy, clearly thriving in the abundant regrowth after last year’s wildfire.