When I was at the Niobrara Valley Preserve a couple weeks ago, I spent some time exploring the area north of the river where the 2012 wildfire ripped through oak savanna and ponderosa pine woodland.  As discussed in earlier posts, the density of trees, especially eastern redcedar, fueled a fire that killed nearly every pine and cedar in the 3000 acres of Preserve land on the north side of the river.  Most oaks and other decidous trees were topkilled, but many resprouted within a few weeks of the fire.  I have been following the regrowth and recovery of this part of the Preserve with great interest, and trying to help the Preserve staff as they think about how to manage the area in the future.

Here is a series of photos from an uphill hike I took on September 18.  The photos are roughly in order of elevation, starting at the river road (just above the floodplain) and proceeding upslope to the ridgetop at the north edge of the valley. 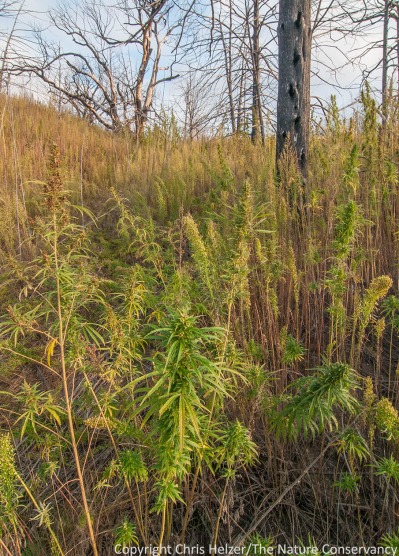 On the first slopes above the river road, hemp (Cannabis) and marestail (Conyza) dominate the understory of a woodland that now consists mainly of skeletons of eastern redcedar and oak trees.  Most of the oaks have resprouts from their bases, however, and a few still have live branches up high.

The abundance of marestail (a native pioneering species) is especially interesting to me because it’s the same species that usually dominates two-year-old prairie plantings.  This is the role it plays in ecosystems, and it plays it well.  It’s difficult to see very much below the marestail, but when I looked closely, I found scattered grasses, sedges, and wildflowers – a good sign of future recovery.

As I walked higher and got into the prairie-covered slopes, ragweed (Ambrosia) replaced marestail as the visually dominant plant in the formerly shaded areas beneath cedar trees.  The ragweed is playing the same role as the marestail – quickly filling in the open space until a more permanent plant community establishes.  That community should move in pretty quickly in cases like that shown in this photo, in which a cedar tree is surrounded by prairie.

Higher up the slope, large areas of prairie had not been encroached upon by cedars, and recovery after the fire was just as predicted – quick and easy.  The vegetation was still a little thin, but that was more of an aftereffect of the 2012 drought than of the fire.  In this image you can see the scattered cedars further downslope (such as the one featured in the previous photo).

Almost every bur oak tree I saw was vigorously resprouting from the base.  Those numerous stems should thin themselves down to three or four major trunks over the next decade or so.  Some of the branches were already 6-8 feet high, so recovery is proceeding quickly.  These oaks were growing along the edge of one of many steep draws scattered along the north side of the river.  As I was wading through 3-4 foot tall marestail, I couldn’t help but wonder if that dense growth and the presence of mountain lions in the area explained the near absence of deer browsing on the oak sprouts (Ecology of Fear).   I don’t know if the deer felt it, but I sure had moments of discomfort, knowing that if a lion was hiding in the weeds nearby, the steep slopes and thick vegetation would make escape nearly impossible.  It made my hike a little more exciting, but I didn’t stay down in those draws very long…

I was surprised and pleased to see numerous examples of large sedge patches growing under the marestail forest, especially on the steeper portions of draws.  I don’t remember seeing many sedges last year, so either I missed them or they are expanding rapidly.  Either way, they will sure help stabilize those slopes as other plants move in to join them, and they’ll also help carry fire when we restart fire management of the area.

High on the slopes, where ponderosa pine and eastern redcedar had dominated just a few years ago, the scenery was every bit as spectacular as it had been before the fire – just different.  Marestail was abundant here too, but there was quite a bit of grass and wildflower cover as well, and several shrub species were flourishing, including smooth and skunkbush sumac, chokecherry, snowberry and others.  Despite the density of scorched tree trunks, the overall feel of the slopes was not one of death and destruction, but rather of abundant life.

Even the very steep erodible slopes at the very edge of the ridge top were full of previously established perennial wildflowers and shrubs, as well as colonizing annuals.

I came down the slope after my walk with a great feeling of optimism.  My greatest worries about this area of the preserve had been that

1) Invasive plants would fill the slopes before the native vegetation could recover, and we’d be faced with the difficult challenge of attacking those invasives in difficult terrain.

2) Numerous eastern redcedar trees would colonize the slopes before there was enough vegetation to carry prescribed fires to knock those cedars back.

3) Soil erosion would be so severe that the seed bank needed to reestablish the native plant community would wash down the slope, along with the topsoil those plants needed to grow.

None of those three have occurred – or at least to the extent I feared they might.  There has been some erosion, but much less than I anticipated, and it doesn’t seem to be affecting vegetation recovery much.  I haven’t seen any truly invasive plants yet – which doesn’t mean they aren’t there, but they sure aren’t roaring in.  Finally, the recovery of the vegetation has been fast enough that we should be able to start running prescribed fires up the slopes within the next few years.  I didn’t see any little cedar trees on my walk, and while I’m sure there are a few around, the abundance is much less than I feared, and our ability to use prescribed fire should make it fairly easy to control them, except on the steepest slopes.

Most of all, the beauty of the Niobrara Valley has survived the wildfire.  The pines are gone from some parts of the valley, but are still doing well in other areas nearby, including other parts of the Niobrara Valley Preserve.  Whether or not (or when) they’ll return to the site of the 2012 fire is still an open question.  Regardless, there is abundant life on the slopes north of the river.  Just because those slopes will be dominated by different species than before doesn’t change the scenic or ecological value of the site.  It’s still one of my favorite places on earth.

13 thoughts on “Continuing Wildfire Recovery at the Niobrara Valley Preserve”