Last week, I got to help our Niobrara Valley Preserve staff round up and sort bison from the Preserve’s east bison pasture.  Ok, I actually only helped with the sorting part because the bison were already in the corral by the time I got there…

Richard Egelhoff, our bison manager, had decided that, even with good grass regrowth this fall, we were going to have to reduce the herd size in order to get them through the winter.  His plan was to sort off the yearling and two-year-old bison and keep the rest.  Many of  bison to be sold would have been sold anyway, but not until November.  Richard hopes that shipping them off early will save enough forage to keep the rest of the herd fed.  In total, the east herd was reduced from 475 animals to 355.

The corral system for the east bison herd is essentially a series of gates along a chute.  The process starts by moving a group of bison from the larger corral into the chute.  Once there, gates are opened and closed to let a few bison at a time down the chute until they are finally winnowed down to a single animal (or a few of the same kind).  At that point, Richard opens one of two gates at the end, and the bison either goes left (back to the pasture) or right (into the sale pen).

If you’ve ever been to similar event with a corral full of cattle, it’s a noisy dusty mess.  With bison, it’s dusty (especially in a drought) but not noisy.  Bison mainly communicate with a series of low grunts.  Because of that, there’s no loud bawling of mothers and calves or bellowing of bulls – just the pounding of lots of bison feet on the dirt, accentuated by grunts and the occasional BANG of a gate.  It can be a violent process at times, as bison ram into each other or into gates – they ARE wild animals, after all – but we tried to get them through as quickly and calmly as we could.  They’re amazingly tough animals.

The bison were pushed down to the corral last Wednesday afternoon and the sorting was finished shortly after lunchtime on Thursday, so the “keepers” spent less than a day in the corral before they were back in their pasture.  The bison selected for sale were run through the chutes one more time on Friday morning so the neighborhood vet could check their tag numbers (little clips on their ears) or add a tracking number to any that were missing one.  That number is required to be on any animals moved across state lines so that a buyer can track health records for each individual animal.

Now if we can get a few more rains, maybe we can grow enough grass to keep those bison happy and healthy until next spring.  By then their 7,200 acre pasture should have plenty of grass again.  Come on rain!

Below is a series of photos from last week’s roundup.  You can click on an image to see a larger version of it, then click on the arrows to move through the remaining photos.  When you’re done, just close the window by clicking on the X in the top left corner.  To see more on this subject, click HERE to see a short story from the Omaha World Herald, along with fantastic photos and video by Alyssa Schukar. 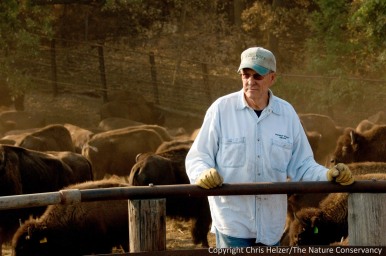 Bison waiting to be sorted.

Preparing to push a group of bison into the chute.

Running to close the chute gate behind the bison.

Bison coming down the lane, gate closers at the ready.

Sorted and ready to go. 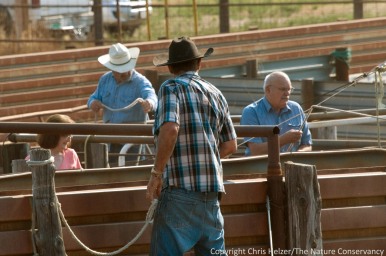 Ready to swing a gate. 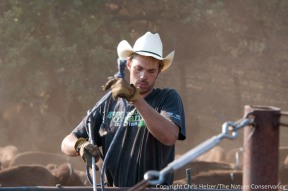 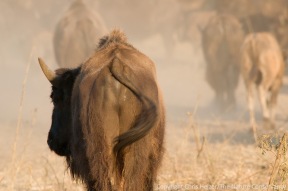 Bison in the dusty corral. 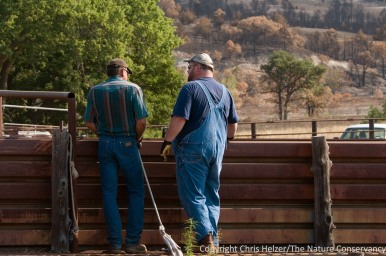 A conversation during a lull in the action.

A big bull looking for a way out of the chute. 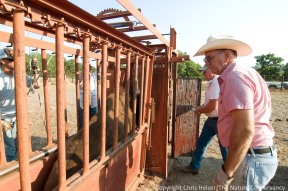 Richard inspects a bison in the squeeze chute while the vet checks its number. 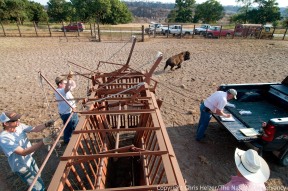 A bison is released from the squeeze chute as the vet records its number.