Last year, I moved into a nice old house (100 years old this year) with a big lot and plenty of potential.  The kids have been enjoying the yard, the loft above the garage, and some of the new furniture and accessories (including a bison skull named Lefty hanging on the living room wall).  One of the unexpected perks of the new house is some junk wood along our neighbor’s fence.  I found the wood late last fall as I was trimming shrubs.  It was buried beneath what appeared to be several year’s worth of leaves.  My first thought upon seeing it was that it might be a good place to find snakes, but it was late enough in the year that they weren’t around then.  I left the wood in place, figuring we’d check it out again in the spring.

Now that spring has arrived, the wood has certainly met expectations.  The other day we found at least 10 snakes underneath it, and there might have been a few more (they kept moving…).  What would be a nightmare for many people has become almost a daily adventure for my son Daniel (“Dad!  Come look at the snakes now!”) and yesterday he took his older siblings out to join in the fun. 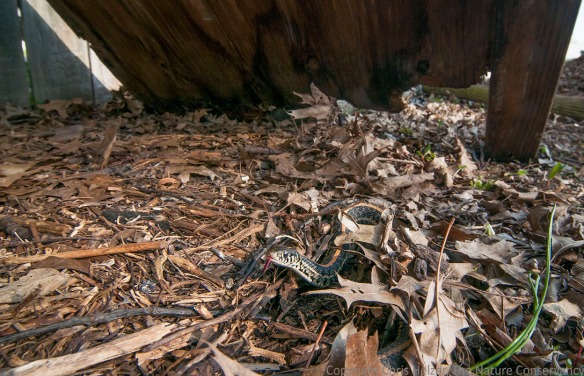 A big female plains garter waits patiently for us to put her wooden shelter back in place.

I’m not sure what the wood was used for (an old makeshift door of some kind?), or why it was left behind to rot beneath leaves, but I think it’ll stay where it is for a while longer.  We have a lot of work to do over the next few years to make the yard more friendly to pollinators, wildlife, and other creatures, but the old wood along the fence is a good start.

…I’m not sure I’ll tell the neighbors about it just yet.  That might be a conversation that should wait until I know them a little better.

Garden spiders, aka black and yellow argiopes, are one of the most recognizable spiders in many prairies (not to mention backyards).  In fact, my kids spent several weeks this August doing daily checks on one big spider in our yard, feeding it every kind of insect they could find.  They had a great time catching insects and figuring out the best way to toss them into the web so that the insect would get tangled up and the spider could rush over and finish it off. 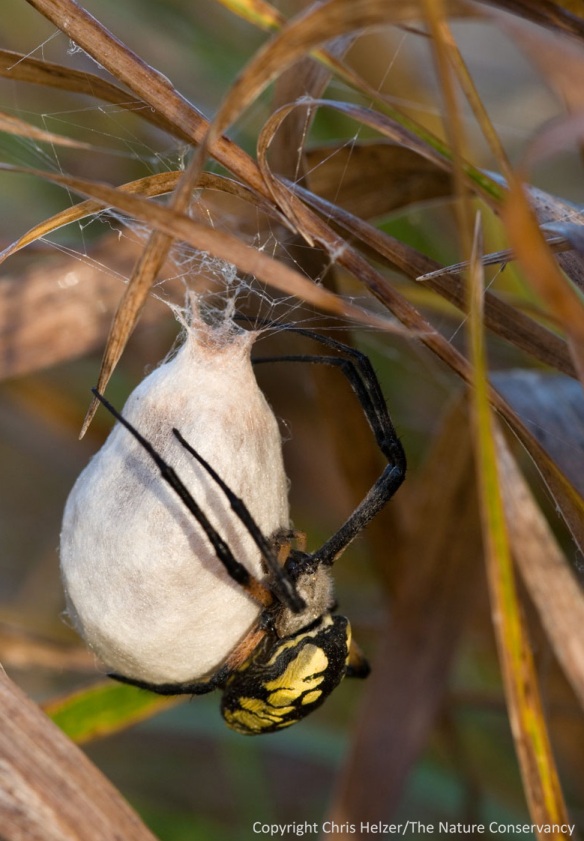 A black and yellow argiope (Argiope aurantia) with its egg sac. Lincoln Creek Prairie - Aurora, Nebraska. (For context, the egg sac was about an inch wide.)

A couple weeks ago, I took the above photo of a black and yellow argiope and its egg sac in a local prairie.  Female argiope spiders typically lay several hundred or more eggs in the early fall, encase them in an egg sac, and die soon after.  (Remember Charlotte’s Web?)  In Nebraska, the eggs hatch in the fall, but the spiderlings remain in the egg sac over the winter before emerging the next spring.  The tough egg sac protects them from winter weather and helps protect the eggs and spiderlings from many predators.

I’ve spent this week at a big conference for scientists of The Nature Conservancy.  One of the themes of our conference has been the need to do a better job of involving people – particularly kids – in conservation.  Clearly, one of the keys to getting kids into conservation is helping them to make personal connections with nature.  I’m convinced that intimate experiences like feeding a spider, holding a turtle, or watching a butterfly emerge from its chrysalis create long-lasting impressions that shape future convictions about the importance of nature.  When my kids are older, I hope that memories of watching and feeding that big spider in our yard will be influential and inspirational to them, regardless of where they go or what they do.  Now if we could just get a big spider in the backyard of every kid in the world…

Black and Yellow Argiopes – the new worldwide ambassador for conservation!