I came across a copy of one of my all-time favorite research articles the other day.  The paper tells a great story about the kinds of complex interactions that occur between the biotic and abiotic components of an ecosystem, including feedback loops and ecological hierarchies.  But more importantly, it’s a story about a guy who dumps bison urine on the prairie to see what happens.

The research paper, written by Ernie Steinauer and Scott Collins was actually a report from the second of two projects they conducted on bison urine impacts at the Konza Prairie Biological Station in Kansas.  Both projects were interesting, but I like the second one best because it focused on how bison urine can affect the prairie community at multiple scales.

Bison and cattle urine creates patches of high nitrogen concentration in the soil.  You can identify those patches in a pasture because they look like dinner plate-sized areas of extra dark green grass that, if left ungrazed, are taller than the surrounding vegetation.  Previous studies had shown that livestock urine increased the aboveground production of plants and altered plant species composition.  Other researchers had also found that herbivores preferentially graze urine-treated areas because of increased plant production and higher N concentration in leaves.  Steinauer and Collins fully expected to see the same patterns, but they also wanted to see whether or not those urine patches acted as initiation points for grazing lawns.

If you were to walk around a pasture being grazed at a moderate stocking rate, you’d see patches of uniformly short vegetation (often bathtub to bathroom-sized or so) surrounded by a matrix of somewhat taller vegetation.  Those short-cropped areas are called “grazing lawns”, and often consist of a single species of grass such as smooth brome (Bromus inermis) or big bluestem (Andropogon gerardii) that is particularly favored by grazers.  Grazing lawns are a result of livestock repeatedly feeding from the same plants all season long while ignoring others.  They do this because the regrowth from plants that have already been grazed tends to be more nutritious than more mature leaves of plants that haven’t.

In their study, Steinauer and Collins wanted to see whether small deposits of bison urine would stimulate much larger grazing lawns around them.  If so, a small fertilization event by a bison would actually lead to a much larger disturbance to the prairie community.  In order to test their idea, they first needed some bison urine.  (How would you like to be handed that task?)  Fortunately, the great wealth of scientific literature includes a publication from 1978 that has a recipe for simulated bison urine.  Don’t you love science?  Steinauer and Collins helpfully reprinted the recipe in their research paper so the rest of us could join in the fun.

I’ve included links to both bison urine research papers by Steinauer and Collins at the bottom of this post, but in summary, they confirmed that bison preferentially grazed patches treated with urine (65% of urine-treated plots were grazed, compared to only 18% of untreated plots).  However, the bigger story is that those urine patches also acted as initiation points for larger grazing lawns.  In fact, many fewer untreated plots would have been grazed if they hadn’t been enveloped by grazing lawns that started in nearby treated plots.

What do we learn from this?  We learn that when a bison (or cow) decides to relieve itself in a particular place, it’s very likely starting a cascade of impacts… 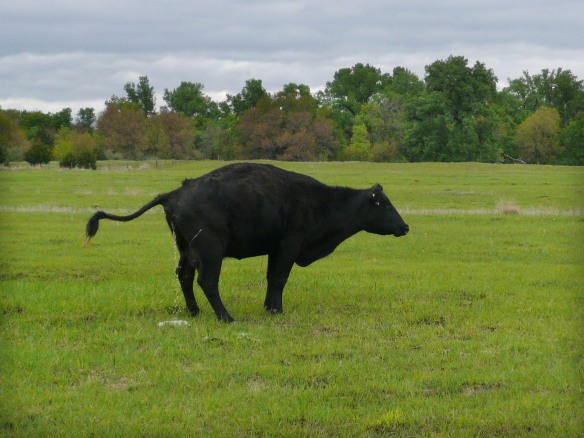 A cow selflessly initiates a cascade of ecological processes in a prairie. This one happens to be within the burned patch of one of our patch-burn grazed prairies - thus, the uniformly short vegetation.

While Steinauer and Collins studied changes in plant composition within their urine patches, they only followed those plants for a single season, and found some conflicting results between their two studies.  Some of those may have come from the fact that their two studies took place on somewhat different soil types.  However, my own grazing research has shown that many of the effects of grazing are most evident in the year following the grazing event, after colonizing plants have had time to move into areas left open by weakened grasses.  It would have been very interesting to have followed the urine patches through several seasons to see how plant composition changed over that time period.

I’ve never met Ernie Steinauer but I bet I’d like him.  I say this because in addition to being crazy enough to mix up and dump bison urine on the prairie just to see what happened, Ernie also kept track of other interesting things that happened within his urine-treated patches.  One thing he noticed was that insect herbivory – especially on switchgrass (Panicum virgatum) – seemed to be influenced by urine treatments as well.  Now there’s the beginning to a great follow up project for someone!  After you try it, let me know what you find.

Here are the links to the two articles.