Back in March, I wrote about a failed attempt to photograph prairie dogs about 15 miles south of where I live.  Apparently, many of you thought it was hilariously funny and had a nice time chuckling at my expense.

Well, I got another chance this summer.  This time, I found myself in the Nebraska sandhills on a beautiful evening with a 4-wheeler, a camera, and a couple hours to kill.  I headed down a two-track dirt road, looking for something to photograph, and came upon a small prairie dog town.  Now, my memory’s not fantastic but traumatic episodes do tend to stick in my head, so I very nearly decided to just keep on moving.  But for some reason – call it stupidity or stubbornness – I stopped the 4-wheeler, unstrapped my tripod, and got my camera out.

As I sat on the 4-wheeler getting everything put together, I watched the nearest prairie dog out of the corner of my eye.  He (I prefer to think of it as a “He” – so sue me) was just sort of loitering around the edge of his hole, maybe 20 yards from where I was parked.  Someone not as experienced with prairie dog photography would probably have assumed that the prairie dog was paying me no attention.  I was under no such illusion.

I knew the prairie dog would be perfectly happy to hang around outside, doing all kinds of cute things, until I moved to the edge of photo range.  Then he’d dive, cackling all the way, into his hole.  I knew that, but I started walking slowly toward him anyway.  I didn’t crouch down like they do on TV or pretend I was a bush. (Why look like a fool for no reason?)  I just walked steadily toward him, figuring that once he disappeared, I’d find a nice comfortable place to sit while he and his friends laughed at me from the safety of their underground bunkers.  Eventually, it would get too dark for photography, I would go home, and they would resume their petty little lives.  It wasn’t much of a plan, but it was a plan.

Sure enough, as I got just about to where I figured my 300mm lens would be worth trying, the prairie dog made a quick feint to the left and dashed back to the right – toward his hole.  But then he pulled up just on the edge of the mound.  Big mistake.  With cat-like quickness, I spread my tripod legs, focused, and snapped a mediocre photo.

Ha HA!  I flashed him a big grin to make him think I was really happy with the shot – just to give him something to think about once he got belowground.  I figured he’d stew about that for days.

Knowing what was coming next, I stepped forward again, figuring I might as well get it over with.  He froze and watched me with his beady little eyes, his whole body tense and ready to dive.  Then, just as I reached the point at which I might actually get a decent shot, it happened.  His head went down…

…and came up with a little grass shoot.

…and he started to chew on it.

My head spun.  What was happening?  Hands shaking slightly, I squeezed off three or four quick shots that were… actually… pretty decent.  In a sudden panic, I whipped around – fully expecting to see three or four of the little buggers making off with my 4-wheeler while their hoodlum friend was distracting me.  But no, everything was quiet behind me.  And in front of me, the prairie dog – who was actually kinda cute, once I actually looked at him – was still chewing on his little piece of grass.

Look at those gorgeous eyes… 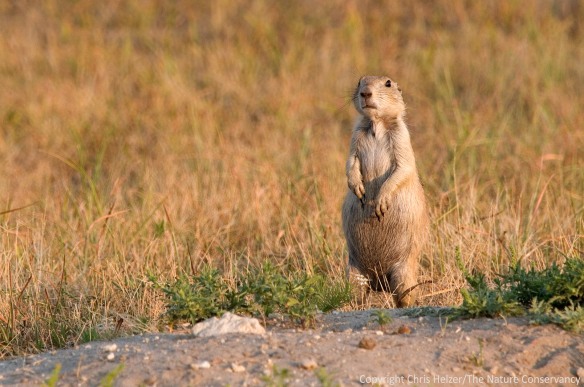 Eventually, I started to get bored.  I mean, he was cute and everything, but photographing him just sitting there and enjoying the pleasant evening didn’t really have the “edge” I had prepared myself for.  I stood up and started walking slowly toward him – just to see how close he’d actually let me get.  As if he was reluctantly playing a part his agent had signed him up for, he looked me over, and then slowly ambled toward his hole.  When he got to the edge of the burrow, he gave me one more glance to be sure I was really still walking toward him, and then dropped from sight.  After a moment, he popped his head up one more time to see if I was really going to force the issue, and then sighed and disappeared.

The light was still pretty nice, and it seemed a shame to waste it so I took a couple half-hearted photos of some flowers – but my heart wasn’t in it.  Everything just felt wrong.  Where was the challenge?  The frustration?  The mocking laughter?  This wasn’t how prairie dog photography was supposed to go!

Just then, over the nearest hill, the barking of a prairie dog woke me out of my lethargy.  I was being challenged!  It was if the little bugger was saying, “Sure, you put one over on my stupid cousin Stan, but you can’t photograph a REAL prairie dog!”

I crept up to the crest of the hill to find my new adversary.  Once I spotted him, I hunched over and worked slowly down the hill – careful not to make eye contact.  As I got near the edge of photo range, I watched, closely but surreptitiously, for the telltale tensing of his body that would precede his dive down the hole.

It never came.  It turns out, he was just as dumb as Stan.  I kneeled down and took some photos of him, but pretty soon I got tired of it and walked back to my 4-wheeler to head home.  After all, how many photos of stupid prairie dogs does a guy really need?

Doesn’t look that bright, does he?

(By the way, there’s no way I’m telling you where this prairie dog town is.  Mine Mine Mine!  So there.)