March is always a busy time on Nebraska’s Platte River.  It’s the beginning of prime prescribed fire season, of course, and a good time to work on fence repair and tree clearing projects.  But there’s no question that sandhill cranes rule the month. 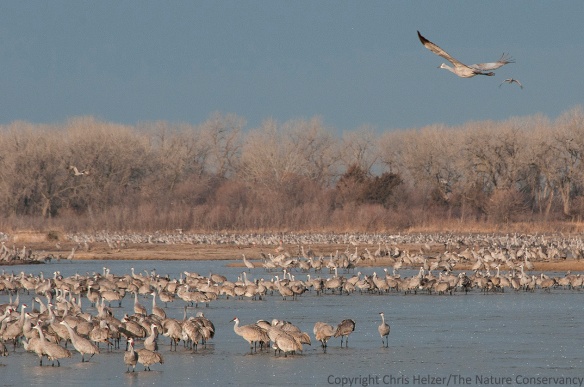 The early morning scene on the Platte River last week.  Note the abundance of feathers floating down the river…

About 600,000 sandhill cranes spend a good portion of late February, March, and early April along the Platte River before heading north to nesting grounds.  It’s one of the greatest migratory phenomena in the world, and it happens right in our backyard.  Because of that, our staff spends quite a bit of time taking groups of people into our viewing blinds where we watch the cranes land on the river at sunset and take off again in the morning.  It’s an important fundraising opportunity for The Nature Conservancy, and a way to show our Nebraska members what we’ve been working on and thank them for their support.  It’s really gratifying to watch the reaction of people as they see the crane spectacle for the first time.

My son Daniel got to take his first trip to a crane blind on his 10th birthday this year. It was very cold, but he still had a great time.

Because I’m in the blinds fairly frequently, I get quite a few opportunities to photograph cranes – though the number of nights and mornings when the light is favorable can be limited.  Also, I’m really not a wildlife photographer, either in terms of my equipment or aptitude.  Despite that, I usually end up with a few decent photos by the end of each season, though not as many as I should.

This year, I also tried to get some video footage of the cranes – something I have even less experience with and aptitude for than wildlife photography!  Also, my only video camera is the video function on my Nikon D300s SLR camera, and I’m still learning to use it.

You can see two of my attempts by clicking on the links below:

Video 1 – Cranes preparing to leave the river on a cold morning.  This 30 second clip gives you a feel for the density, activity, and noise of a crane roost.

Video 2 – Cranes chasing each other around on a sand bar.  There is a lot of jumping and chasing among cranes.  Some of it is courtship and pair bonding, some of it is just posturing.  This clip is about 30 seconds long.

Silhouettes against the evening sky.

In the evenings, the cranes often wait to come to the river until it is getting dark, making photography difficult.  In those cases, the best photo opportunities are usually silhouettes of the birds against the sky as they drop into the river.  On nights when the light is nice and our guests are fully engaged watching the big event, I manage to snap off a few shots.  Both close-ups on a few birds at a time and more wider views can be attractive. 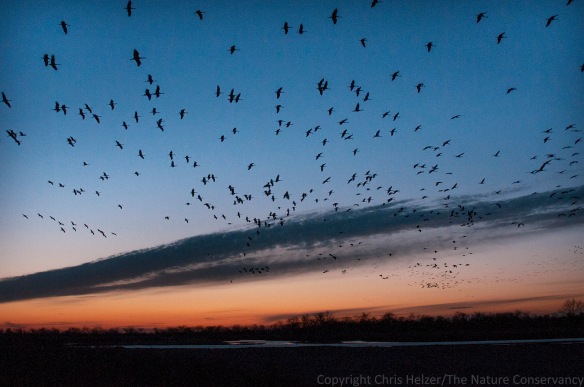 Sandhill cranes coming to the river after sunset.

This year, my favorite image was the first shot I took one evening.  The sunset was beautiful and the cranes were parachuting gracefully toward the water as I poked my camera lens out the window of the blind.  The resulting photo reminded me of the theme song to a 1980’s TV show – The Greatest American Hero.

“Believe it or not, I’m walking on air…” Cranes floating down to the river at sunset.

On one of the crane tours I led this spring, I met 11-year-old Jack McDowall and his dad.  Jack is a fellow blogger who is working on a year-long project to photograph and document his bird sightings.  I think many of you would enjoy his photos and the natural history information he includes along with them – including a post from his trip to our viewing blind.  If you’d like to visit his blog, you can link to it here.

Prairie restoration can be a powerful tool for grassland conservation, but we’re not taking advantage of its full potential.  Too often, we think and talk about prairie restoration (aka prairie reconstruction) in the wrong way.  Instead of trying to restore an ecosystem, we try to reproduce history.

I was in Washington D.C. a couple weeks ago and visited Ford’s theater, where President Lincoln was assassinated in 1865.  After the death of the president, the building went through drastic changes, including being completely gutted after a partial collapse of the interior.  By the time the decision was made to restore the building for use as a historic site, the National Park Service basically had to start from scratch.  Regardless, through painstaking research and a lot of hard work, the theater was rebuilt to closely resemble Ford’s theater of 1865.

Unfortunately, the Ford’s theater approach has turned out to be a poor fit for prairie restoration.  Prairies aren’t buildings that have specific architectural plans and well-defined pieces that can be collected and assembled to create a pre-defined end product.  Prairies are dynamic ecosystems that are constantly changing and evolving, and their components include organisms that interact with each other in complex ways.  Trying to recreate a prairie that looks and functions just as it used to – especially on a small isolated tract of land – is nearly impossible.

Reseeded prairie at The Nature Conservancy’s Kankakee Sands Restoration Project in Indiana. If the plant community today looks different than it did before it was farmed, is that really a failure of the restoration project?

That doesn’t mean small scale prairie restoration is a bad idea.  I think reestablishing vegetation that is similar to what was at a site many years ago can have tremendous historic and educational value, and can also provide important habitat for many grassland species.  Where this kind of prairie restoration falls flat is when we expect too much from it.  It’s really easy to find glaring differences between the restored prairie and what we know or think used to be there – soil characteristics are different, insect and wildlife species are missing, plant species are too common or too rare, etc.  These “failures” have led some people in conservation and academia to become disillusioned with the whole concept of prairie restoration.

In reality, prairie restoration has proven to be very successful, and is a tremendous tool for grassland conservation.  We just need to find and apply a better metaphor.

A Better Metaphor for Ecological Restoration

Unlike efforts to restore old buildings, prairie restoration projects should not be aimed at recreating something exactly as it existed long ago.  Instead, effective prairie restoration should be like rebuilding a city after large portions of it are destroyed in a major disaster.  When reconstructing a metropolitan area, replicating individual structures is much less important than restoring the processes the inhabitants of the city rely on.  The people living and working in a city depend upon the restoration of power, transportation, communication, and other similar functions.  Those people don’t care whether roads, power lines, or communication towers are put back exactly as they were before – they just want to be able to get the supplies and information they need, and to travel around so they can to do their jobs and survive.  Restoration success is not measured by how much the rebuilt areas resemble the preexisting areas, but by whether or not the city and its citizens can survive and thrive again.

Similarly, restoration of fragmented prairie landscapes should not be an attempt to recreate history.  It should be an attempt to rebuild the viability of the species – and, more importantly, the processes – that make the prairie ecosystem function and thrive.  Success shouldn’t be measured at the scale of individual restoration projects, but at the scale of the resultant complex of remnant and restored prairies.  Are habitat patches sufficiently large that area-sensitive birds can nest successfully?  Are insects and animals able to travel through that prairie complex to forage, mate, and disperse?  Are ecological processes like seed dispersal and pollination occurring between the various patches of habitat?  When a species’ population is wiped out in one part of the prairie because of a fire, disease, or other factor, is it able to recolonize from nearby areas?

Pollination is an example of an important process that drives prairie function. Increasing the size and/or connectivity of prairies by restoring areas around and between prairie fragments can enhance the viability of pollination and other processes.

At first glance, choosing the appropriate metaphor for prairie restoration may seem insignificant compared to other challenges we face in grassland conservation.  However, if we’re going to successfully restore the viability of fragmented prairies, we can’t afford to waste time and effort worrying about whether or not we’ve matched pre-European settlement condition, or any other historical benchmark.  Instead, we need to focus on patching the essential systems back together.

Read more on this subject…

– A prairie restoration project case study, with ideas about how to measure its success.

– Some recent early attempts we’ve made to measure restoration success by looking at the responses of bees and ants.

– A post about the importance and definition of ecological resilience in prairies.