It’s good to be back in the prairies after spending last week in the mountains.  The mountains were beautiful and daytime temperatures were pleasantly cool, but I sure enjoyed the chance to catch up with the goings on in our prairies yesterday.  As if to welcome me home, the weather provided about an hour of bright overcast skies and light winds around lunchtime – perfect weather for a little close-up photography.

As I wandered, I found a crab spider perched atop an upright prairie coneflower (Ratibida columnifera) flower.  I’m a sucker for crab spiders, so I crept up and snapped a photograph of it.

I was surprised the spider was sitting so high on the flower – it seemed awfully visible to predators, and poorly placed to capture pollinators coming to visit the blooming portion of the flower below.  Just as I was wondering what it was up to, the spider answered my question for me.  It popped itself up on its “tiptoes” and let loose a long silk trail.

If you look closely, you can see a long silk thread emerging from the abdomen of the spider.

The spider was attempting a technique commonly called “ballooning”, though “kiting” seems a more appropriate term.  Small spiders use ballooning to travel long distances by releasing long silk threads into the breeze and floating off to wherever the wind carries them  Often, the spider only goes a short distance, but it’s still a faster mode of transportation than walking on short little legs!  Sometimes, if the wind is right, a ballooning spider can go many miles.

In this case, the light winds were apparently insufficient to carry the spider off, and after it failed to launch, it detached its silk thread and sat back down (dejectedly?).  I imagined the spider’s disappointment at having steeled itself for a potentially long trip only to find that it wasn’t going anywhere after all. 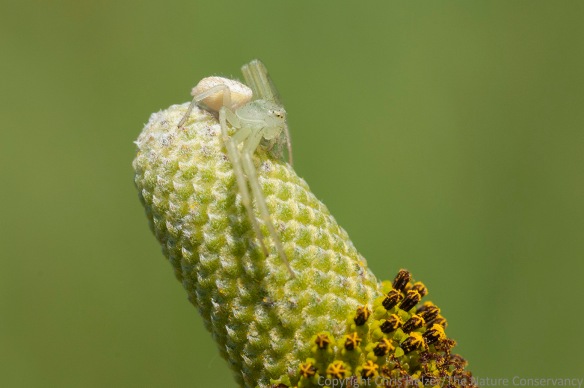 As I walked off, I left the spider with good wishes that it would catch a better breeze in the near future, but also with a silent warning.  It’s great to go to new and different places, but sometimes travel just helps you appreciate how nice it is to be home.

At times, prairies in east-central Nebraska can have such an abundance of large wildflowers, they resemble flower gardens.  Early spring is not one of those times.  There are plenty of prairie flowers blooming this spring, but you wouldn’t know it from a distance.  In fact, it often seems as if you have to nearly step on a spring wildflower before you see it.

These blooming ground plum plant, while very pretty, looks like its alone in a vast barren landscape.  In reality, there are lots of other flowers on the prairie – they’re just hard to see.  This photo was taken last week at Prairie Plains Resource Institute’s Griffith Prairie.

In the coming weeks, things will change.  Late spring and early summer flowers such as ragwort (Senecio plattensis), shell-leaf penstemon (Penstemon grandiflorus) and spiderworts (Tradescantia spp) will be displayed at the top of stems that rise a foot or two from the ground.   Clusters of those flowers can easily be seen from hundreds of yards away.  For now, however, wildflowers are keeping a low profile.

Of course, short stature and small flowers make perfect sense in the early spring.  Flowers that bloom at the beginning of the growing season don’t have much time between winter’s thaw and blooming time (especially this year!)  The small plants are in a race to bloom before neighbors – especially grasses – overtop them, making it difficult for both pollinators and light to find them.   For the most part, spring-flowering plants grow just long enough stems to get their flowers off the ground and make those flowers just big enough to attract pollinating insects. 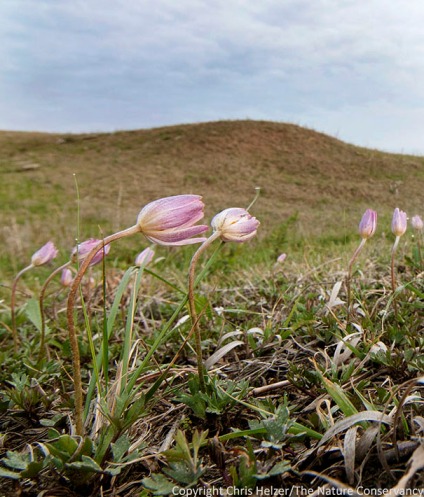 Wind flower (Anemone caroliniana) blooms at heights of about 3 or 4 inches. Because both the flowers and stems are small, even a big patch of wind flowers can be difficult to see from 15-20 feet away.

While not universally true, many early flowering plants seem to thrive best when a prairie isn’t loaded with thatch and tall dead vegetation from previous seasons.  Prairies burned during the dormant season or were grazed or hayed the previous summer/fall seem to have the greatest abundance of spring flowers.  Of course, there is some observer bias involved in measuring that since spring flowers are much easier to see in short vegetation…

Wild pansy, aka Johnny Jump-up (Viola rafinesquii), is an annual violet that is spreading (in a good way) across some of our restored Platte River Prairies. It is flourishing this spring in sites that were grazed during last year’s drought.

This spring, I’ve been paying particular attention to prairies that we burned and grazed during drought of 2012.  Most were awfully short, brown, and barren-looking by late last summer and stayed that way through the winter.  It’s been nice to see them greening up this spring and supporting good numbers of wildflowers.  Interestingly, I’ve seen more wind flowers (Anemone caroliniana) this year than I can remember from previous springs.  The two sites in which I’ve seen big patches of wind flowers were both burned and grazed pretty hard last year, making the flowers easy to see, but probably also allowing the plants to grow with little competition for light or other resources.

While spring flowers are short in stature, they seem to be able to attract pollinators.  Of course, many of those pollinators are good at finding hidden plants by following their scent.  In addition, when the number of flowering species is limited, pollinators do what it takes to find whatever flowers are available!

What’s more interesting to me is that as I’ve been seeing and photographing wind flowers over the last week or so, I’ve seen a surprising number of tiny crab spiders on them.  I would guess that there’s a crab spider on one out of every 10-15 flowers, and they all appear (to me) to be of the same species.  I wish I knew how those crab spiders found the flowers.

A crab spider sits on a wind flower at Griffith prairie in the early morning, waiting for the flower to open and attract pollinators for it to catch.

45 miles away from Griffith Prairie, this crab spider (of the same species?) was having a successful afternoon of hunting on a wind flower in our Platte River Prairies.

I’ve been seeing a lot of trailing silks in the air lately, so I know some spiders are on the move (by ballooning), and I assume young crab spiders disperse that way.  But if they do, landing on or near a flowering plant at this time of year seems awfully unlikely.  Are the crab spiders I’m seeing on wind flowers the lucky few that landed near a good hunting place?  Or are most crab spiders able to find a flower to hunt on, even in the spring when flowers are scattered around in low numbers?  If so, how?

Maybe one of you will be able to answer those questions for me.  For now, I’ll just add them to my long list of other questions – a list that will surely grow considerably during this coming field season.