The Grassland Restoration Network is a loose affiliation of those of us trying to use prairie restoration (reconstruction) as a way to rebuild, conserve and sustain grassland ecosystems.  Each year, we put on a workshop to share ideas, techniques, research results, and stories with other.  Workshops are hosted by a different site each year, giving us the opportunity to visit a range of projects over the years.

Kicking the dirt together helps us better understand challenges and strategies being employed at each others’ sites, but also stimulates better discussions than when we’re sitting in a sterile hotel conference room.  The workshops tend to minimize lectures and maximize both formal and informal discussion time.  I missed the 2012 workshop, but you can read my posts about the 2011 workshop in Indiana by clicking here.

This year’s workshop will be hosted by the Missouri Department of Conservation in Columbia, Missouri from July 16-18.  If you are interested in attending, you can download the preliminary agenda and registration information by clicking here.

In addition, you can follow the activities of the Grassland Restoration Network on our new blog/website, initiated by Bill Kleiman, at Nachusa Grasslands.  That link is here.

Prairie restoration can be a powerful tool for grassland conservation, but we’re not taking advantage of its full potential.  Too often, we think and talk about prairie restoration (aka prairie reconstruction) in the wrong way.  Instead of trying to restore an ecosystem, we try to reproduce history.

I was in Washington D.C. a couple weeks ago and visited Ford’s theater, where President Lincoln was assassinated in 1865.  After the death of the president, the building went through drastic changes, including being completely gutted after a partial collapse of the interior.  By the time the decision was made to restore the building for use as a historic site, the National Park Service basically had to start from scratch.  Regardless, through painstaking research and a lot of hard work, the theater was rebuilt to closely resemble Ford’s theater of 1865.

Unfortunately, the Ford’s theater approach has turned out to be a poor fit for prairie restoration.  Prairies aren’t buildings that have specific architectural plans and well-defined pieces that can be collected and assembled to create a pre-defined end product.  Prairies are dynamic ecosystems that are constantly changing and evolving, and their components include organisms that interact with each other in complex ways.  Trying to recreate a prairie that looks and functions just as it used to – especially on a small isolated tract of land – is nearly impossible.

Reseeded prairie at The Nature Conservancy’s Kankakee Sands Restoration Project in Indiana. If the plant community today looks different than it did before it was farmed, is that really a failure of the restoration project?

That doesn’t mean small scale prairie restoration is a bad idea.  I think reestablishing vegetation that is similar to what was at a site many years ago can have tremendous historic and educational value, and can also provide important habitat for many grassland species.  Where this kind of prairie restoration falls flat is when we expect too much from it.  It’s really easy to find glaring differences between the restored prairie and what we know or think used to be there – soil characteristics are different, insect and wildlife species are missing, plant species are too common or too rare, etc.  These “failures” have led some people in conservation and academia to become disillusioned with the whole concept of prairie restoration.

In reality, prairie restoration has proven to be very successful, and is a tremendous tool for grassland conservation.  We just need to find and apply a better metaphor.

A Better Metaphor for Ecological Restoration

Unlike efforts to restore old buildings, prairie restoration projects should not be aimed at recreating something exactly as it existed long ago.  Instead, effective prairie restoration should be like rebuilding a city after large portions of it are destroyed in a major disaster.  When reconstructing a metropolitan area, replicating individual structures is much less important than restoring the processes the inhabitants of the city rely on.  The people living and working in a city depend upon the restoration of power, transportation, communication, and other similar functions.  Those people don’t care whether roads, power lines, or communication towers are put back exactly as they were before – they just want to be able to get the supplies and information they need, and to travel around so they can to do their jobs and survive.  Restoration success is not measured by how much the rebuilt areas resemble the preexisting areas, but by whether or not the city and its citizens can survive and thrive again.

Similarly, restoration of fragmented prairie landscapes should not be an attempt to recreate history.  It should be an attempt to rebuild the viability of the species – and, more importantly, the processes – that make the prairie ecosystem function and thrive.  Success shouldn’t be measured at the scale of individual restoration projects, but at the scale of the resultant complex of remnant and restored prairies.  Are habitat patches sufficiently large that area-sensitive birds can nest successfully?  Are insects and animals able to travel through that prairie complex to forage, mate, and disperse?  Are ecological processes like seed dispersal and pollination occurring between the various patches of habitat?  When a species’ population is wiped out in one part of the prairie because of a fire, disease, or other factor, is it able to recolonize from nearby areas? 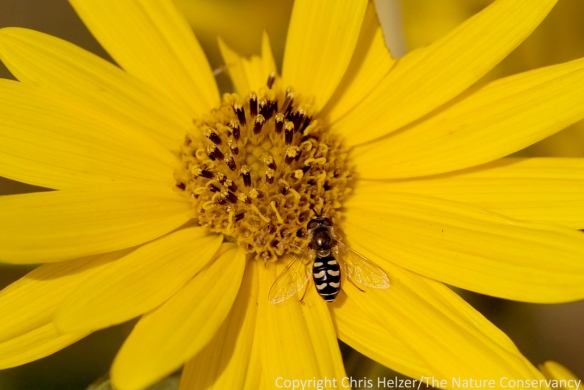 Pollination is an example of an important process that drives prairie function. Increasing the size and/or connectivity of prairies by restoring areas around and between prairie fragments can enhance the viability of pollination and other processes.

At first glance, choosing the appropriate metaphor for prairie restoration may seem insignificant compared to other challenges we face in grassland conservation.  However, if we’re going to successfully restore the viability of fragmented prairies, we can’t afford to waste time and effort worrying about whether or not we’ve matched pre-European settlement condition, or any other historical benchmark.  Instead, we need to focus on patching the essential systems back together.

Read more on this subject…

– A prairie restoration project case study, with ideas about how to measure its success.

– Some recent early attempts we’ve made to measure restoration success by looking at the responses of bees and ants.

– A post about the importance and definition of ecological resilience in prairies.