A few of us took a short trip out to our family prairie last weekend.  My daughter was back from college for the weekend and wanted to see what was happening in the prairie, so we did a little canoeing (tight circles in the small pond), hiking, and exploring.  Later, I found myself photographing dotted gayfeather seeds, and while I was looking for more of those plants, I stumbled upon a grass leaf that was bent funny with some kind of white silk holding it in that position.  I had actually walked past the grass leaf before my brain finally registered the fact that I should go back and examine it.

Looking more closely, I could see enough of the creature inside to identify it as a crab spider.  It had been raining quite a bit during the previous couple weeks, so my first thought was that the crab spider had made itself a little rain shelter.  (Crab spiders don’t make webs, but like all spiders, do make silk and use it for various purposes.).  However, my better guess was that it was a nest and that it might contain a bunch of spider eggs.  I photographed it for a few minutes, taking lots of photos, since the breeze was making it hard to keep the spider in focus.

Later, when I was looking through images at home, I was culling all the photos of the spider that weren’t in focus (dang that wind) when I happened to spot something that confirmed my guess.  Right above an unfocused crab spider face, a tiny spiderling appeared – just in one photo, not in any others.  Apparently, this was indeed a crab spider nest, and at least one egg had already hatched.

Crab spiders aren’t the only group of spiders that take care of their kids.  Frequent readers of this blog will, of course, remember a previous post of mine showing a mother wolf spider carrying her brood around on her body, and even if you don’t, you may have heard that wolf spiders lug both their egg sacs and newly hatched babies around with them.  Wolf spiders aren’t alone, though, and we’re still learning more about how well various spider species care for their young.  If you’re interested, you can read more in this nice blog post from Biome Ecology.  Otherwise, you can just join me in wishing this particular crab spider’s brood good luck as they disperse and try to find safe places to overwinter.

While I was doing some vegetation monitoring in a native hay meadow this morning, I found a bobolink nest.

If you’re not familiar with grassland nesting birds, the idea of building a nest right on the ground might seem pretty silly and dangerous.  However, while a predator doesn’t have to fly or climb into a tree to get to the eggs, it still has to find them, and that can be pretty difficult when the nest is out in the middle of a large grassland.  To illustrate how well hidden the above nest was, here is a series of photos taken at various heights above it. 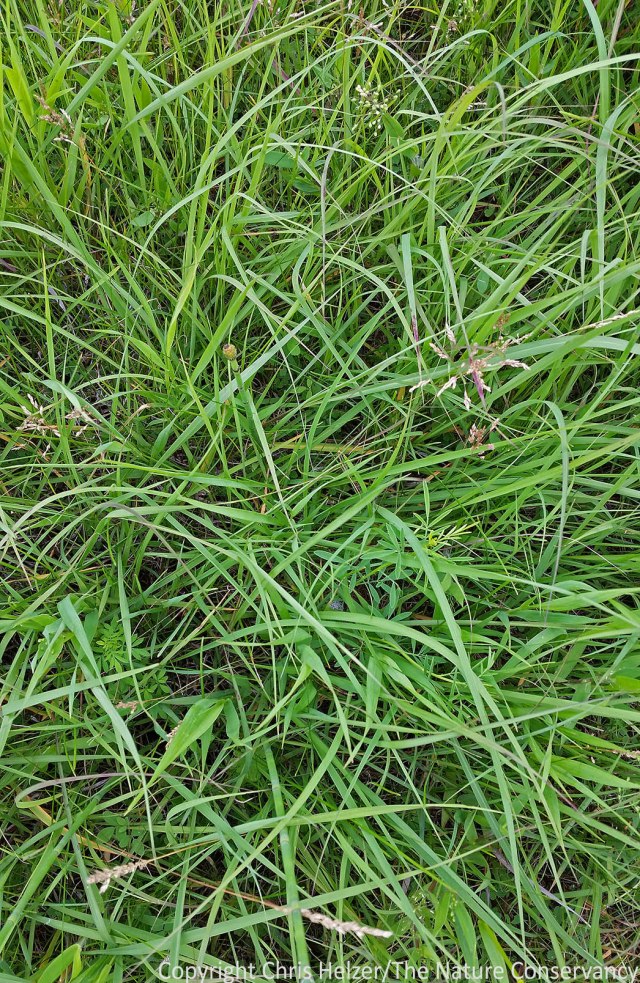 I took these photos with my phone. This first one was taken about 2 feet above the vegetation, which was itself about a foot and a half tall. Can you see the nest? (No you can’t.)

This photo was taken right at the height of the vegetation. If you look closely, you can see the eggs below.

This image makes the nest look very exposed, but only because I was holding the vegetation away from it to get a good photo.

The only reason I found the nest is that I crouched down in the vegetation a few feet from the nest to examine the plants in my plot frame.  About a minute later, the female bobolink fluttered out of the nest.  She must have waited anxiously as long as she could stand it, but my continued presence that close to the nest finally flushed her – allowing her to fly to safety but exposing the location of her nest.  Fortunately for her and her unborn chicks I took only photographs.  I wish her the best with her family, including one (so far) cowbird.

(For those of you who might not know the story of brown-headed cowbirds, they are brood parasites who drop their eggs in the nests of other bird species.  Those host birds then raise the cowbird young – often at the expense of their own.  This is a host-parasite relationship that has been going on for thousands of years in North American prairies.)