Do you know what time it is?  It’s time for another PRAIRIE WORD OF THE DAY!

Heterogeneity is really just a longer word for Diversity, which is another way of saying “lots of different things”.  So why use the word “heterogeneity” instead of just saying “lots of different things”?  Well, for one thing, using big words makes a person sound smart, and when you’re a prairie ecologist and no one really understands what it is you do for a living, it’s good to at least sound smart.

More importantly, there’s a nice alliterative (another big word!) feel to the phrase Habitat Heterogeneity, which happens to be one of the most important phrases in prairie ecology.  In fact, I would argue that the foremost objective of any prairie manager should be to create habitat heterogeneity within the prairie(s) they manage.

Habitat heterogeneity simply means diversity or variety in habitat types.  Habitat homogeneity is the opposite – a lot of habitat that is all the same.

Every organism in a prairie has its own unique habitat requirements, so the number of different habitat types in a particular prairie is correlated with number of species that can live there.   Let’s use prairie birds as an example.  Birds such as upland sandpipers like to nest in large patches of relatively short-stature grassland.  Around here, a big hay meadow is great habitat for them, especially if it was cut fairly late in the previous year and is still short in stature when the subsequent breeding season starts.  On the other hand, Henslow’s sparrows want to nest in prairie habitats with relatively tall and dense vegetation.  It would be highly unusual to find Henslow’s sparrows and upland sandpipers nesting in the same patch of prairie because their habitat preferences are very different.  So, if you want both species in your prairie, you have to provide both short and tall/dense habitat.  Other birds have their own unique habitat requirements, including nearly bare ground (e.g., horned lark), relatively short, but with abundant thatch (grasshopper sparrow), tall with lots of tall/weedy wildflowers (dickcissels), tall and nearly impenetrably dense vegetation (sedge wrens), and many others.  Only if your prairie provides all those different habitat conditions will you attract all those different bird species.

Dickcissels prefer habitat with lots of tall wildflowers or weeds.  They often weave their nest into the stems of a tall clump of vegetation.

The same diversity of habitat preferences exists in other groups of prairie species as well.  Among small mammals, for example, voles tend to prefer habitats with abundant thatch, while pocket mice are more often found where bare ground is abundant – and there are many others.  Insects and other invertebrates have the same kind of diversity in habitat preferences

Scale is important.  While a bird, mammal, or insect might have a broad preference for a certain kind of habitat structure, it is likely to need some heterogeneity within that habitat too.  A mouse, for example, might prefer patches of prairie with fairly sparse vegetation, but it is likely to need a few clumps of vegetation dense enough to hide in when predators are near.  Insects and reptiles are ectothermic (cold blooded) and need to regulate temperature, so while a snake might like to hide in tall dense so it can bite your ankle as you walk by (I’M KIDDING!), it also needs some places to bask in the sun.  All of this means that habitat heterogeneity is important any many different scales.  Heterogeneity at a fairly large scale (acres) helps provide places for many different animals to live in a prairie, but heterogeneity within the home range or territory of each animal (square meters, or even centimeters) can be important too.

Some habitat heterogeneity occurs simply because soil texture, nutrients, and moisture, along with topography all vary across a landscape.  A prairie is likely to have areas of more productive soils where vegetation grows tall and thick, and less productive soils where vegetation is more sparse, for example.  In addition, water will pool in some areas of a prairie more than others because of topography, altering the habitat for both plants and animals.  However, despite this “naturally occurring” heterogeneity, it’s still important for prairie managers to look for ways to provide more.

This landscape at The Nature Conservancy’s Broken Kettle Grasslands in northwest Iowa shows the kind of natural heterogeneity that occurs in many landscapes.  Topography, soil variability, and other factors create a diverse set of conditions for plant growth and habitat structure.  Land management can add to that heterogeneity and improve it even more.

Prescribed fire and haying/mowing do a great job of altering habitat structure at a fairly large scale (acres).  By applying those treatments in different parts of a large prairie each year (and varying the timing of each from year to year), a manager can create a shifting mosaic of habitat patches that supports a wide diversity of animals.  However, both fire and mowing are pretty non-selective – most or all of the vegetation within a burned or mowed area gets the same treatment.  Leaving unmowed patches of grass here and there and varying the height of the mower as it moves across the site can help leave more heterogeneity behind.  Designing prescribed fires so that not all vegetation burns (e.g., mowing around some patches ahead of time, burning on days with lower temperatures or higher humidity, etc.) can also help with habitat heterogeneity – though those kinds of fire might also be less effective at killing trees or accomplishing other objectives.

In prairies where livestock grazing (cattle or bison, for example) is feasible, it is much easier to create small scale heterogeneity because grazers pick and choose which plants, and how much of each plant, to eat at any one time.  By controlling grazing intensity, and varying it across both time and space, managers can create prairie patches that are ungrazed, almost completely grazed, and in various stages of partial grazing – with a mixture of tall vegetation and nearly bare ground.  The uneven application of “fertilizer” from the rear ends of grazers contributes even more to habitat heterogeneity by temporarily altering soil productivity in lots of little spots across the prairie.

These cattle at Konza Prairie in Kansas have created a nice example of small scale habitat heterogeneity by grazing many of the grasses short while leaving leadplant, purple prairie clover, and other wildflowers ungrazed.

Whether it’s fire, mowing, grazing, herbicides or various combinations of those, creating habitat heterogeneity may the most important job of a prairie manager.  We still have a lot to learn about how the scale and configuration of habitat patches affect wildlife and insect populations.  What we do know, however, is that the prairies thrive when they have a lot of different types of habitat.  …When they have habitat heterogeneity.

And that, folks, is your Prairie Word of the Day.

Who could be mad at these big beautiful brown eyes?

A differential grasshopper (that’s its name, not its demeanor) on stiff goldenrod.

As it turns out, lots of people can.

The differential grasshopper is one of a long list of native North American species, headlined by white-tailed deer and raccoons, that have adapted very well to today’s agricultural landscapes.  Whether you call these species adaptable generalists or pests probably depends upon whether or not they’re eating your sweet corn.  Regardless, you have to admire (or at least recognize) the traits that allowed them to thrive under changing habitat conditions that have pushed many other native species to the brink of extinction. 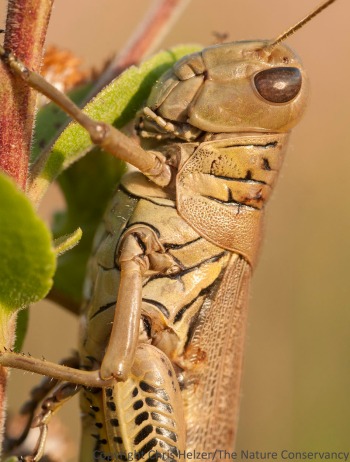 The olive-greenish color and the strong herringbone pattern on its back leg helps distinguish the adult differential grasshopper from other species. 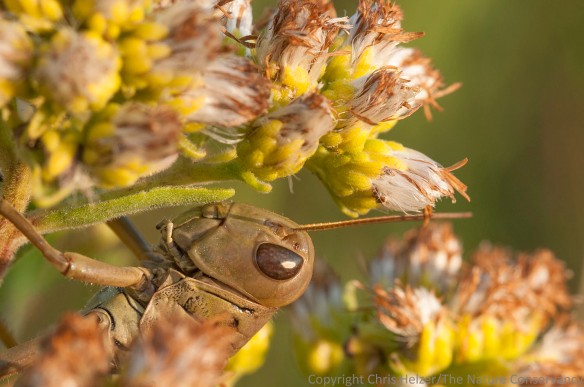 Before Europeans took over the continent, differential grasshoppers lived mainly in low grasslands, feeding on a wide variety of grasses and wildflowers – but, purportedly, with a particular affinity for giant ragweed.  When the landscape began changing to one dominated by rowcrops, alfalfa, and short-grazed grasslands, it basically created heaven on earth for differential grasshoppers.  Today, they are abundant enough that they can be found almost anywhere across the landscape (at least in Nebraska).  Apparently, they can move as much as 10 miles a day to find food. 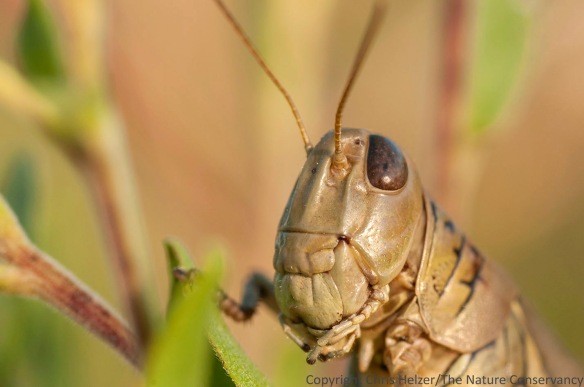 “Don’t hate me because I’m beautiful.”

Unless, of course, they’re eating your sweet corn.