As has become an annual tradition, I’ve once again put together a collection of my favorite photos from the last year.  Most of these have appeared in 2015 blog posts, although I think at least one or two haven’t.  (I’m not telling you which ones.)

Thank you, as always, for reading this blog.  Please help me spread interest and enthusiasm about prairies and conservation by passing along this or any other blog post you think others might enjoy (including the three minute video I put together earlier this year).  Together, we can fight the perception that prairies are just boring patches of grass!

Have a wonderful holiday season and enjoy the final week of 2015!

As 2012 draws to a close, it seems every photo-related website and blog is putting together a “best of” series of photos from the year.  So, why not – I’ll join in.  It’s not a bad way to review the year.

I winnowed this year’s crop down to 24 images.  (Sorry if it takes a minute or so to load them all.)  Of the 24 photos, all but one has already appeared in a blog post from this year.  For those of you who enjoy this sort of challenge, you can try to figure out which one is new.

The first image shows my son helping me overseed our family prairie in January, 2012.  We’d grazed this portion of the prairie pretty hard in 2011 to suppress the dominant grasses and allow some other plants to have a chance to express themselves.  Since there are quite a few wildflower species that are rare or missing from the prairie, we also harvested and broadcast some seeds to try to help the process along. 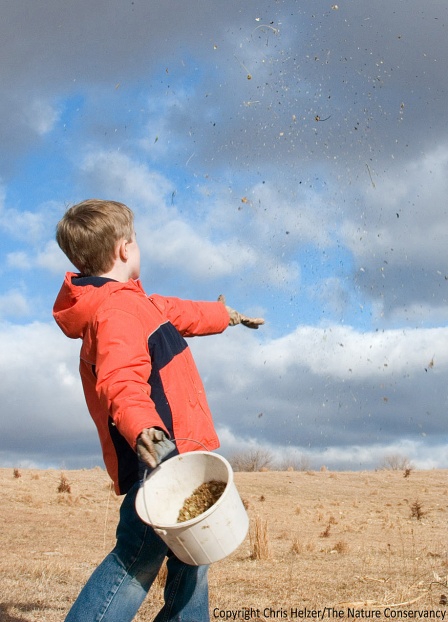 My son Daniel, throwing seeds at our family prairie.  Near Stockham, Nebraska.

Spring came quickly this year, and with it came early spring prescribed fires.  Fire is an important tool for land management, but can also cause significant damage when it is out of control (as we experienced later in the year).  Regardless of positive or negative impacts, there’s no denying the visual power of fire from an artistic standpoint. 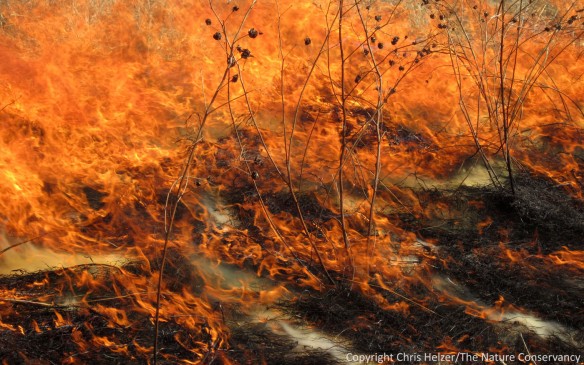 The winter of 2011/2012 was the first time anyone around here can remember sandhill cranes staying for the winter.  The Central Platte River is well known for hosting half a million or so cranes each spring, but this past year we had thousands of them on the river all winter long.  Judging by the numbers we’ve been seeing in the last couple of weeks, we may get to repeat the sounding joy this season as well.

March is always a very busy time of year for us as we split time between prescribed fire and sandhill crane tours.  I’ve taken people into viewing blinds along the Platte River well over a hundred times, but the experience never gets old.

Close-up photography allows me to find photo opportunities almost anywhere.  This dogbane beetle (on a dogbane plant) was photographed in a small prairie right in my hometown. 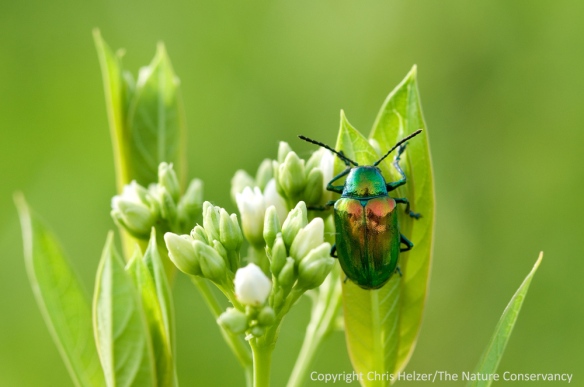 Similarly, this next photo was taken at a small prairie planting in the front yard of my in-laws’ place in eastern Nebraska.  Sideoats grama is one of the most distinctive-looking of the prairie grasses, but can be difficult to photograph.  On the evening this photo was taken, the wind was dead calm, and I was able to isolate and photograph this “laundry line” of sideoats flowers. 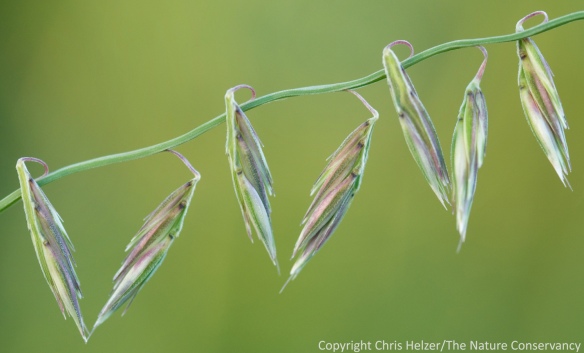 This mantis image came from the same night as the grass above.  The sun was dropping fast, and just as the light was fading away, I spotted this mantis and managed to get a couple shots of it before it got too dark to photograph anymore. 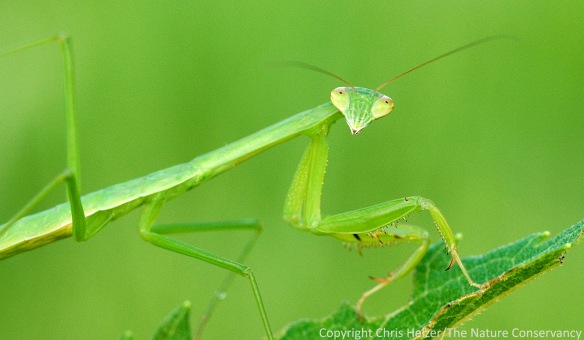 Every year’s weather favors a different suite of short-lived plant species in prairies and wetlands.  This year was a great year for prairie gentian (Eustoma grandiflorum).  These were photographed along the edge of a restored wetland swale in our Platte River Prairies.

Prairie gentian growing in abundance on the edge of a wetland.  The Nature Conservancy’s Platte River Prairies, Nebraska.

While photographing the prairie gentian, I spotted this tiny katydid nymph on the edge of one of the flowers.  As long-time readers of this blog surely know, it’s a katydid rather than a grasshopper because of its very long antennae. 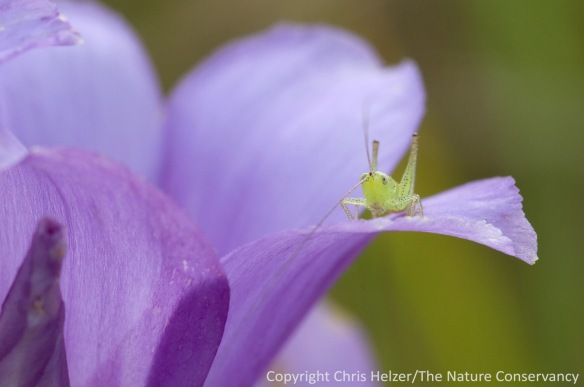 This crab spider was hunting for pollinators on purple prairie clover flowers.  There were plenty of bees and flies around that day (though I didn’t get many good photos of them), so I’m sure it didn’t go hungry. 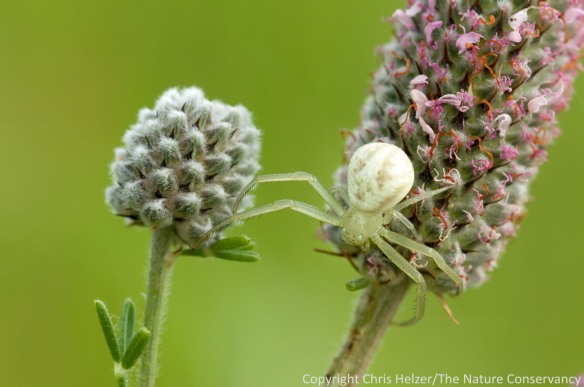 In early July, we hosted two entomologists/ecologists from Missouri (James Trager and Mike Arduser) in our Platte River Prairies.  I invited them to help us evaluate our restoration work from the perspective of bees, ants, and other insects.  It was a great week, and stimulated a lot of thinking and discussion about how our management work affects insects – and how those insects affect and indicate the status of important ecological processes.  James and Mike also stopped by some prairies in southeastern Nebraska where I am helping to coordinating research.  The photo below shows James in one of those prairies. 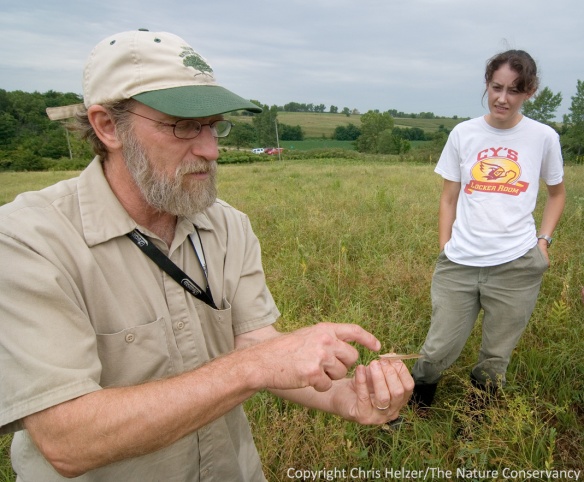 James Trager, naturalist at the Shaw Nature Reserve in Missouri, displays the finer points of a katydid in southeastern Nebraska.

Tyler Janke heads up a collaborative effort to design strategies for restoring cottonwood woodland along the Missouri River in Nebraska.  I spent a July day with him, looking over some early results of various methods he’s testing. 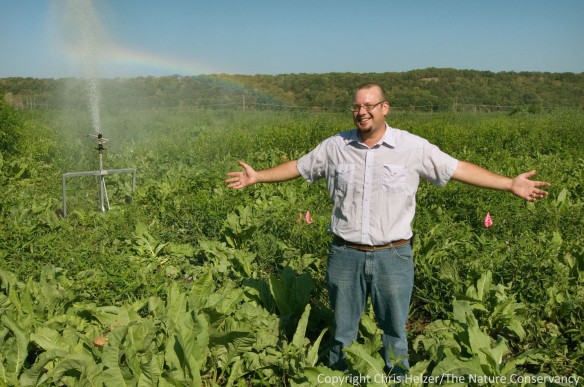 The Nature Conservancy’s Tyler Janke stands in front of some irrigated plots where he is testing cottonwood restoration strategies.

As I was driving home from work on a hot day in late July, I got a call that there was a wildfire on or near our Niobrara Valley Preserve.  The remote location of the fire and the weather forecast made it sound like it could be a bad one.  It certainly was.  By the time I got up there a few days later, over half of our 56,000 acre property had burned, and several neighbors had lost homes. 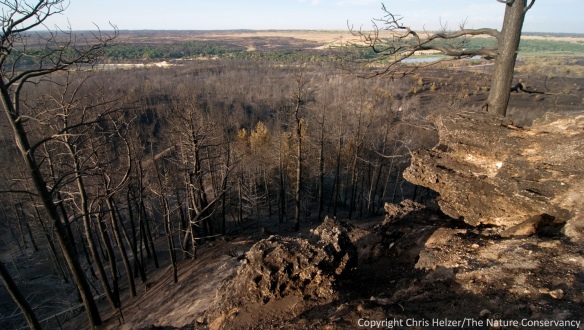 Even after the dramatic changes caused by the fire, the scenery at the Preserve was as striking as ever. 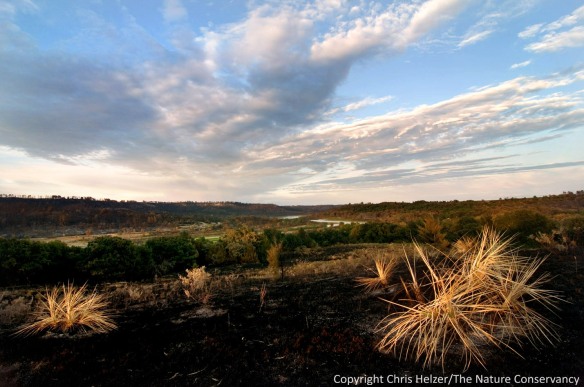 Walking through the ash and soot, it was nice to see how many creatures had survived the fire.  This lizard was one of many hanging around in the few remaining shady areas in the sandhill prairies. 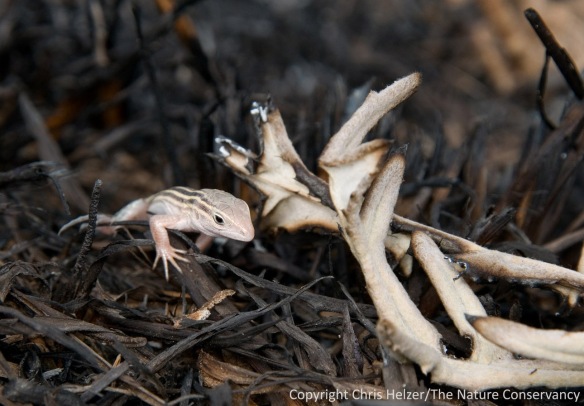 A fence lizard hunts for food among the ashes.

Annual sunflowers were big winners in the competition between plants within drought-stricken prairies this year.  That was true in our Platte River Prairies as well as along the Niobrara.  The photo below shows a small native bee taking advantage of one of many sunflowers that survived both the drought and the wildfire at our Niobrara Valley Preserve. 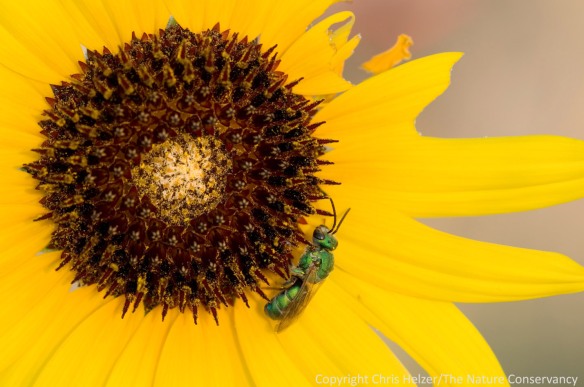 The most difficult impacts of the wildfire were economic.  The vast majority of our east bison pasture (over 7000 acres) burned, leaving the herd with little left to eat until the grass was able to recover.  I got to go back up the Preserve in early August to help the staff and volunteers with a bison roundup to sort and sell off a good portion of the herd.  Bison roundups have some similarities to cattle roundups, but bison are definitely wild animals (and really big), and now and then they can remind you of that in dramatic ways.  An example is when a big bull tries to jump over the 10 foot wall of a corral. 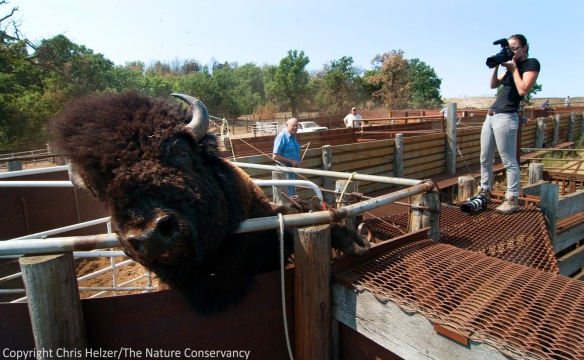 A bison bull looking for a way out of the corral chute during a bison roundup.  The Niobrara Valley Preserve, Nebraska.

Large portions of the Niobrara Valley Preserve and the surrounding neighborhood will look very different in the coming years, but it remains a beautiful and ecologically important place.  It will be very interesting to watch the recovery and adaptation of the species and communities that live there.

Despite the drought, many of our Platte River Prairies still had some areas of lush growth this summer.  These rosinweed plants, though not as tall as in some years, were looking just fine.

Rosinweed (Silphium integrifolium) in restored prairie along the Platte river.

After a frustrating attempt in the spring to photograph prairie dogs near home, I found some more accommodating photo subjects in the Nebraska sandhills.  Judging from the feedback I received, many of you enjoyed reading about both my failed and successful attempts.

A black-tailed prairie dog in the Nebraska sandhills.  North-Central Nebraska.

The great thing about box turtles is that they’re fairly easy to keep up with as they move through the prairie.  That makes turtle photography considerably easier than, say, prairie dog photography. 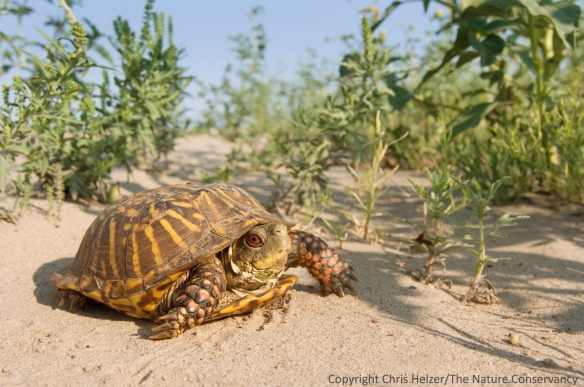 An ornate box turtle in the Nebraska sandhills.  North-Central Nebraska.

While walking through one of our wetlands in the autumn, I spotted this jumping spider watching me.  I repaid the favor. 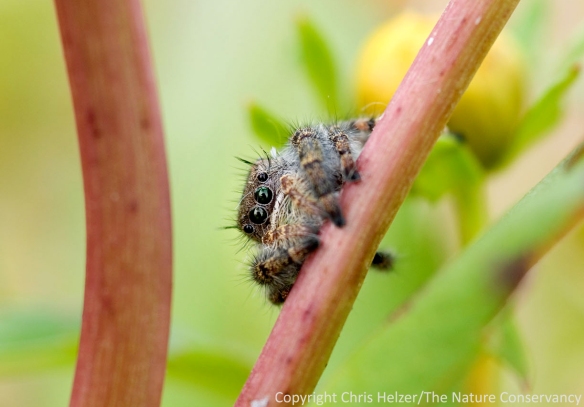 A jumping spider on a beggarstick plant in a restored wetland.

A month or so later, I returned to the same wetland to attempt some landscape photography.  After changing my mind several times, I decided I did, in fact, like this particular photo from that day. 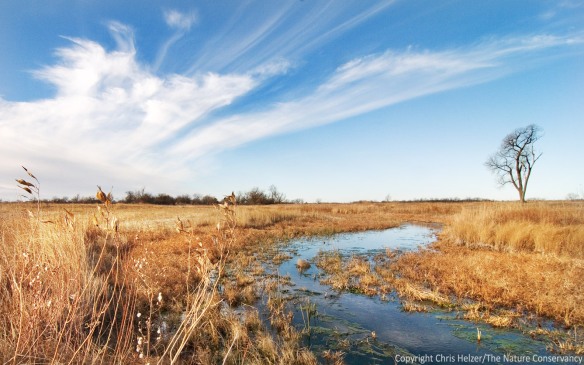 A restored wetland and stream along the Central Platte River.

Finally, this last photo seems the most appropriate to cap off the year 2012 for me.  I was crossing a bridge over the Niobrara River a few days after the wildfire when I saw this photographer down below.  Watching the photographer capturing the beauty of the river, despite being surrounded by a charred landscape, was particularly striking. 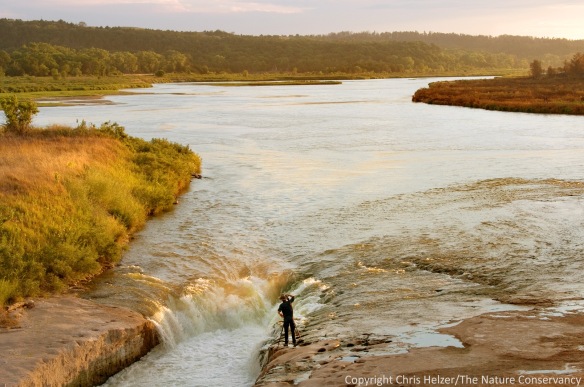 A photographer captures the late day light coming through the falls of the Niobrara River near the Norden Bridge.  The Nature Conservancy’s Niobrara Valley Preserve, Nebraska.

Images have tremendous power.  Although this blog is about far more than just pretty prairie photos, those photos do play a critical role.  They help illustrate the topic being discussed, but they also showcase the beauty and diversity of an ecosystem that many people wrongly assume is flat and uninteresting.

I’m very grateful to all of you who regularly visit this blog.  I also really appreciate it when you forward your favorite posts to friends and colleagues.  Together, we can show the world how complex, beautiful, and important prairies really are.

Remember, if you want to have blog posts emailed to you, you can subscribe at the top right corner of the page.  You can even follow the blog on Twitter: @helzerprairie.