Last Friday, I wandered through the small prairie we burned back on March 10.  Even though it is still very early spring, there were already a number of prairie plants popping out of the ground.  I posted photos of this site right after the fire was completed.  Today, I’m posting some photos taken 10 days later at the same site, along with some discussion of the impacts and effectiveness of prescribed prairie fires.

Most prairie plants grow from belowground buds, making them much less vulnerable to fire than trees and shrubs, which start their new growth above ground – from buds at the tips of branches.  When fire burns woody plants, those aerial buds and living tissue are destroyed, stressing the plants and forcing them to start over from ground level.  However, fire (at least during the dormant season) simply burns up the old stems and leaves of non-woody prairie plants, causing no injury.  Instead removing those dead stems helps stimulate growth in the coming season, especially via increased sunlight, which warms the ground and is available to new shoots as they first emerge. 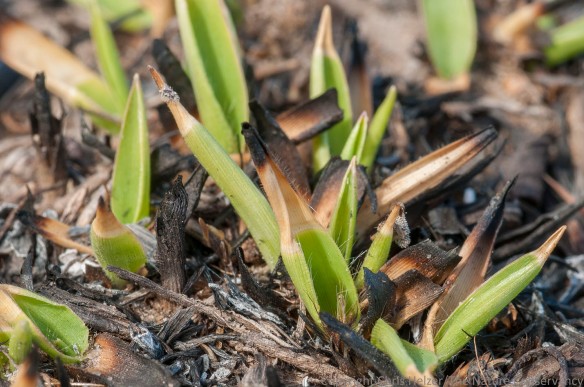 Scribner’s panicum (Panicum oligosanthes), a native cool-season grass.  In this photo, you can see that the tips of the grass leaves had just started to grow when the fire came through ten days earlier.  Since the leaves grow from the base, those burned tips don’t impede plant growth.

Increased sunlight hitting the ground has helped the small area we burned on March 10 green up much faster than unburned prairie nearby.  Our main objective for the fire was to remove thatch in order to improve the effectiveness of planned herbicide treatment/re-seeding of some smooth brome patches within the small prairie.  The brome is responding very strongly to the fire, and its rapid growth (and the absence of thatch to intercept spray droplets) will make the grass more susceptible to our herbicide treatment.  However, since many other plants are also popping up, we’ll carefully spray only the thickest patches of brome where no other species are growing. 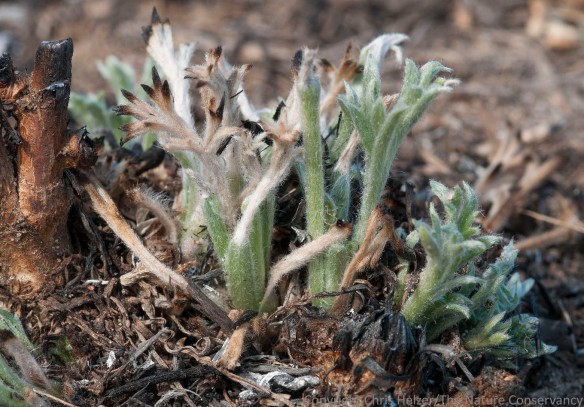 Green sage (Artemisia campestre) growing next to its old stem from last year.

Prescribed fire can be a useful tool when trying to temporarily flip the balance of power from cool-season invasive grasses (smooth brome, Kentucky bluegrass, etc.) to native warm-season grasses (big bluestem, indiangrass, etc.).  However, timing is critically important.  A dormant season or early spring fire is actually counterproductive unless it is followed by herbicide treatment, mowing or grazing.  Those early fires stimulate the growth of cool-season plants – including smooth brome and Kentucky bluegrass – giving them a big advantage over later-season plants which won’t start growth until late April or early May.  By the time those warm-season plants start growing, the early plants will have had a month or more to extract soil moisture and nutrients, and will be big enough to dominate competition for light and root space.

If we’d wanted to suppress smooth brome solely with fire (and not follow up with herbicide), we would have waited until late April or early May to burn.  That late season burn would have stressed the actively-growing brome and bluegrass and provided direct sunlight to freshly emerging shoots of big bluestem and other warm-season grasses.  More often, we combine periodic fire and grazing to suppress brome and bluegrass and facilitate greater plant diversity. 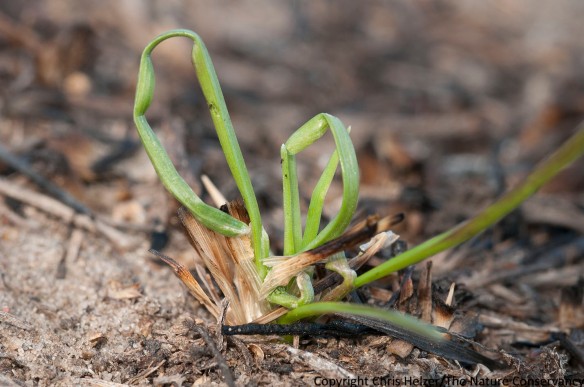 Along with smooth brome (Bromus inermis), Kentucky bluegrass (Poa pratensis) also responded well to the fire.  This particular plant will likely have a very good year, but the brome and bluegrass in the thicker patches of this prairie will be sprayed with glyphosate herbicide and re-seeded.

The regrowth of prairie plants after fire can seem almost magical.  Fire is absolutely an important natural process and a very useful tool for prairie managers.  However, prescribed fire is not magic, and doesn’t automatically lead to better prairies.  As with any tool, fire has to be applied thoughtfully (and carefully!) in order to meet objectives.

The timing of fire dramatically impacts the way prairie plant communities respond.  Early spring, late spring, summer, and fall fires each have different effects on plants, and those effects are also influenced by soil moisture, the presence/absence of grazers, and many other factors.  Prescribed fire can also have serious impacts on some animals, even during the dormant season.  Many invertebrates, for example, overwinter in the aboveground plant stems or thatch, making them very vulnerable to fire. It’s important not to burn an entire prairie at once – especially if that prairie is isolated from other grasslands. 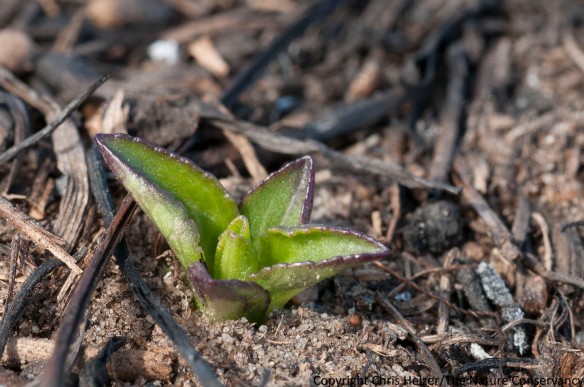 I’m not sure what species of wildflower this is but I’m looking forward to finding out as it gets bigger!

Fire plays many critical roles in prairie ecology – suppressing woody plants, removing thatch, stimulating microbial activity, aiding in nutrient cycling, and more.  However, while fire is important and its effects are both useful and aesthetically pleasing, it is not automatically positive.  Safe use of prescribed fire requires training, experience, and caution.  The effective use of fire requires clear objectives and careful planning that ensures those objectives will be met.

As I’ve discussed before, the actual process of conducting a fire can be very stressful.  However, once the smoke clears and I can relax, its easy to appreciate both the beauty and ecological benefits of prairie fires.  The emergence of bright green prairie plants through black ash is one of my favorite sights, and I love watching plant and animal communities respond and adapt to changing habitat conditions.

In prairies, rising from the ashes is more than a metaphor – it’s a way of life.

Ok, I admit it – I’m a sucker for crab spiders.

As much as I enjoy looking at prairie flowers, I enjoy them even more when there’s a crab spider lying in wait among their petals.  I must have more than a hundred photos of crab spiders on flowers, but when the lighting is good and I see those long hairy legs and cute little face… I just can’t help myself!

Do you suppose I need some kind of intervention?

“Hi, my name is Chris Helzer and I really like crab spiders.”  (Hi Chris…)