My wife and I have a tradition of spending part of our holiday break up at the Niobrara Valley Preserve.  It’s only a two year old tradition, but nevertheless…

This year, the weather was great for hiking, so we spent quite a bit of time exploring.  Here are a few photos from our trip.  Think of them as a Happy New Year gift from me.  (Sorry, it’s all you get.)

Kim and I spent a long afternoon on the north side of the river, exploring the former pine woodland (now grassland).

Evan Suhr (land manager) took us out to look at some of last year’s management results, and on the way back we came upon a couple big bison bulls.

Rose hips provided some rare color in the winter landscape.

While almost all the ponderosa pines on the north side of the river (on Preserve property, at least) were killed by the 2012 wildfire, there are still numerous pines alive elsewhere on the Preserve, including this one.

A very light snow fell while we were at the Preserve, and it made for a very pretty Christmas Eve morning.

This hoary vervain (Verbena stricta) leaf turned into a cup of snow.

On Christmas Day, we found several small springs and followed the stream they created all the way to the Niobrara River.  There were several great waterfalls along the way.

On Christmas Eve, a big full moon rose over the river not long after sunset.

I have a pretty great job.

I love my work for many reasons, but a big one is the freedom I have to take photographs when opportunities present themselves.  Photography is an important part of conservation work, and my photos are used in many places – including this blog, print and online publications, and even things like notecards and thank you gifts for donors and board members.

The Niobrara River flowing through the Niobrara Valley Preserve, Nebraska.  I captured this image during a brief 15 minutes of sunlight during an otherwise overcast couple of days.

Because good photos are so important to our work, I often take a few minutes (or longer) in the middle of a work day to slip away and photograph something – especially when the light is pretty and/or we find something interesting like a bull snake in the middle of the road.  I owe my co-workers a great deal for their extreme patience and forbearance in this regard.  Not only are they understanding of my tendency to wander off in the middle of jobs, they have also gotten used to the fact that they could be the subject of a photo at any moment.  (Thanks to all of you!)

Last week, I helped with a bison roundup at our Niobrara Valley Preserve.  I did some actual work during part of the day, but also found time to photograph bison, staff and volunteers helping with the roundup – and even a few other things like colorful leaves and a cute little cricket.  Because this is normal behavior for me, no one thought much of it.  Or at least they didn’t say anything, which was polite of them.

I found this little cricket when I wandered away from the roundup for a little while.

The overcast skies on the day of the roundup made landscape photography difficult, but there wasn’t much breeze and close-up photography worked ok – especially during brief moments when the sun was behind a thinner area of clouds.  Smooth sumac leaves were starting to fall, but I found a few still hanging on.

In addition to making time during the work day, I had two other opportunities for photography while I was up at the Preserve.  The first came on the night before the roundup.  I didn’t get to photograph anything in the afternoon or evening because I didn’t arrive until after dark.  However, as we were getting ready for bed, I was admiring the bright moon hiding behind some thin clouds.  I pointed them out to Evan, one of our Hubbard Fellows and a talented photographer.  After a brief discussion, the two of us headed out to see what we could do with the light.  We didn’t get back until after midnight… 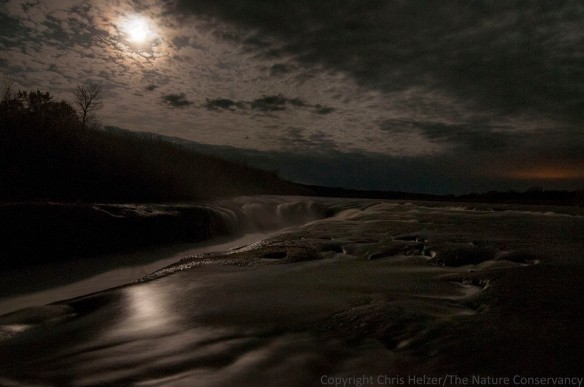 Here’s Evan’s version of the moon over waterfall.  I chose to make the scene kind of dark and moody but he chose to make his brighter.  It’s always fun to see how different photographers interpret the same view…  I really like the way he framed the image so the hole in the bottom right of the image counterbalances the moon in the top left.

The second opportunity came on the morning after the main roundup.  Some of the staff was sticking around to help with vet work on the bison calves, but I needed to head home to catch my daughter’s cross country meet, so I was planning to leave after breakfast.  The sky had been overcast all the previous day and all that morning, but as I was packing my gear, I noticed a small break in the clouds.  It looked to me like it just might provide a few minutes of morning sunlight, so I stopped packing, grabbed my camera, and headed up the hill.  Just as I’d hoped, the sun did pop through the clouds and I had almost exactly 15 minutes of light before it disappeared again behind what looked to be a never-ending mass of dark clouds. 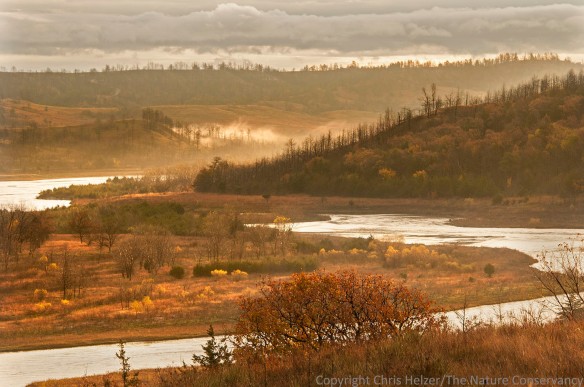 As I started wandering up into the sandhills, the light started to fade, so I just had time to take a couple quick shots.  This isn’t my favorite photo from the day, but it does showcase the beautiful immensity of the Nebraska Sandhills landscape.

The old photographer’s adage is “F/8 and be there”, meaning that camera settings are much less important than making sure you’re in the right place at the right time.    I’m incredibly grateful that my job allows me to “be there” when the light and other conditions line up, and that I’m allowed to just grab my camera and go shoot.  It also doesn’t hurt to work in beautiful places.

I often feel like I’m getting away with something, and that eventually I’m going to have to get a real job.  Boy, I sure hope not!