Earlier this week, I wrote about interesting holes in the bark of burned ponderosa pine trees at our Niobrara Valley Preserve.  However, I wasn’t actually focused on documenting holes in trees at the time – I was just looking for interesting photo compositions.  Ponderosa pine bark patterns are always fun to explore, but the additional contrast between the tawny browns and the charred black from the wildfire created even more intriguing images than usual.  The photo below was my favorite from that trip’s pine bark art.

The photo reminds me of a Rorschach test.  What do you see in it?  I see the tall face of an angry looking man looking to the right.  He may or may not be sticking out his tongue.  I think I’d prefer not to hear Dr. Rorschach’s diagnosis of my personality characteristics…

I want to start by acknowledging the irony in this post.  As someone who has spent a lot of time killing trees in prairies and urging others to do the same, it’s pretty funny that this post is all about the positive aspects of having a big tree in a prairie wetland.  In my defense, I’ve never said there shouldn’t be ANY trees in prairies, and I’m writing this particular post as a photographer, not an ecologist.  Matt H and other tree lovers – this one’s for you.

I was out on the edge of one of our restored wetlands last week as the sun was coming up.  The wind was calm, the weather was cool, and I was hoping for some nice close-up photos of flowers and insects.  Most photographers know that first light is a great time for photography because the sunlight is soft and warm as the sun pops over the horizon.  Often, a little haze or thin cloud cover near the horizon can extend that period of nice diffused light as the sun rises higher.  Last week, however, there was no haze or cloud cover to help out, and I only had about 10 minutes between the time the sun breached the horizon and the point at which the light was too bright to make good photos.

Fortunately, (I can’t believe I’m saying this) there was a big cottonwood tree nearby and I had the opportunity to use a little trick I’ve found useful for extending my time window for close-up photography.  Essentially, I just followed the shadow of the tree as the sun rose into the sky.  I didn’t take pictures in the shade, exactly, but neither did I take pictures in the sun.  I used the very edge of the shadow.

Here’s my elegant diagram of how to use the diffused light at edge of a tree’s shadow during the first hour or so after sunrise.  As the sun rises, the tree’s shadow shortens, but in the soft edge of the shadow, the light is beautifully diffused and perfect for close-up photos.  I find a composition just inside the edge of the tree’s shadow and then wait to snap the shutter until the rising sun’s light just starts to pop through the upper leaves of the tree.  Then I move closer to the tree, find another subject, and start the process again.

The boundary of the shadow created by a big tree is not a hard edge.  Instead, there is a narrow zone of diffused light between complete shade and bright sunlight.  That narrow zone creates some nice opportunities for photography.  Essentially, I just follow the shadow as it moves across the ground.  I find potential photo compositions inside the shadow and then take the picture as the edge of the shadow passes by.  I have to work quickly because the shadow moves right along, but I usually have enough time to get several shots of each subject in nice light.

Here are some photos from from last week’s tree-diffused light.

I had time to take 4 or 5 quick shots of this great lobelia (Lobelia siphilitica) before the shadow moved away completely and the light got too bright. The Nature Conservancy’s Platte River Prairies, Nebraska.

Several species of beggarticks (Bidens) grow along the edge of wetlands along the Platte River.

Field mint (Mentha arvensis) is another wetland edge plant. Plants in the mint family usually have a pronounced square stem. 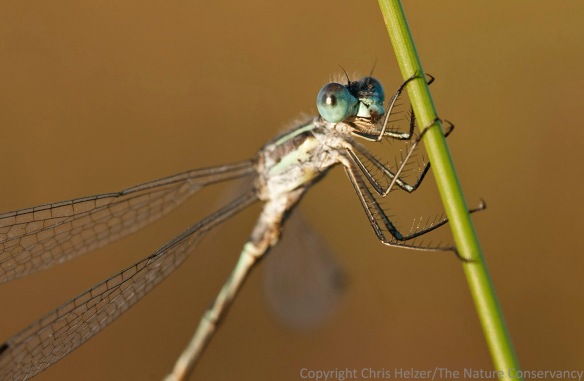 This damselfly was the only one I successfully photographed – out of more than a dozen I stalked. I crept slowly up to it with my tripod while it was still in the shade of the tree and then got my photo as the shadow’s edge came across it.

Interestingly, our staff has had several discussions over the years about whether or not we should cut down the big cottonwood I used as a photo diffuser last week.  There are some good ecological arguments for taking it out.  For example, large trees act as perches for predatory birds and can affect the way other birds use nearby habitat.  Migratory sandhill cranes (a focus of our wetland management) tend not to roost near trees, and many breeding bird species avoid nesting near them as well.  In addition, trees often act as gateways for invasive plants because they create a different microclimate that favors some invasives (especially cool-season grasses) and because they attract perching birds that drop seeds of other invasives.

Good ecological arguments can be made for keeping the tree too – including some that are similar to the arguments against it.  It’s kind of nice to have a big tree for eagles and other large predatory birds to hang around in because predators are important players in the ecosystem.  Orioles, red-headed woodpeckers, kestrels, and many other bird species – including some of conservation concern – nest in big cottonwoods.  Also, the plants that grow beneath cottonwoods are not all invasives, and include some nice native species such as Jerusalem artichoke, Virginia wild rye, and many others.

To be honest, the biggest factor that has swayed our discussions about the tree is its size.  No one has really felt like tackling the job of cutting it down, so the arguments to keep it have gained the upper hand.

I guess that’ll be ok…